76 replies to this topic

...i would have bought onyx edion ($50) but i read that the pieces tip over really easy.

That's right! I take this to play:

But the onyx edition is certainly worth every cent !

I have just bought a very rare Stratego game on ebay ! I wanted it more than ten years !!!

Here's a list with all the classic stratego games through the century :
http://hong.vlinden....&uz=&s=Stratego

I don't even know how many different Stratego versions there are in total.
Anyone who knows this perhaps?

- The annual data are not all equal ( Years )

have sent an email to Hong Team sent - They want to change the years in 2 games ! tomorrow

but is otherwise a top side


Yesterday I received the Royal Stratego - I think if Jumbo makes a remake - it will sell very well !

You mailed this site i linked because of a few year mistakes?
Lol,...what are you? A ultra die hard fan who is totally obsessed with the history behind Stratego?

Btw, I do think that the origin of Stratego is tracable way back in time,...the ancestors of Stratego must be thousands of years old.
Just like chess,....all kinds of boardgames based on war are thousands of years old.
We'll never know the very true authentic origin where Stratego came from.
I don't think that L'attaque has been the birth of Stratego.
Maybe as we know it now today but the rabbithole goes much deeper than that

Spece is a Stratego fan. He definitely has purchased enough Stratego games to last a dozen life times. I think you have a fetish for Stratego Spece =P.

I wonder who's got the biggest Stratego-collection in the world.
Maybe it is Spece

Spece is a Stratego fan. He definitely has purchased enough Stratego games to last a dozen life times. I think you have a fetish for Stratego Spece =P.

Better than stamps - have some Kem poker cards ....

I wonder who's got the biggest Stratego-collection in the world.
Maybe it is Spece

I only have 8! but the coronation is sure the Royal Stratego - which is very rare to find

Stratego is in The Hall Of Fame :

Had friend tell me once his father gave him his (the father's) old set, pieces were wood. I figure that set was 50-ish.

The First Skirmishes...
In 1908 a French wonman, M. Hermance Eden filed a patent for a "jue de bataille avec pieces mobiles sur damier," which translates as "a battle game with mobile pieces on a game board." The game, soon sold as L'Attaque, has a red army vs. a blue army -- and was the ancestor of the STRATEGO game. L'Attaque became very popular and was sold all over Europe and Britain through World War II and beyond.

The Battle Escalates...
The name STRATEGO was first trademarked by a Dutchman named Jacques Johan Mogendorff in 1947. In the '50s it was sold to a European game company. Early version of the board had only plain squares, and a "no man's land" instead of lakes. Somer early sets had wooden playing pieces. Then in 1961 Milton Bradley bought the rights to the STRATEGO game, and introduced "The Popular Old World Game of Skill and Strategy" to America.

All-Out Attack
Although first advertised as an adult game, STRATEGO quickly became a family favorite. Over the years the game's artwork has had many makeovers, from simple illistrations to full-color game board landscapes and realistic box cover battle scenes. Today the STRATEGO game is played all over the world; in tournaments; as a computer game; and over the internet. But all the while the object has remained the same: Perfect your strategy and try to capture the enemy's flag!

History
The origins of Stratego can be traced back to traditional Chinese board game "Jungle" also known as "Game of the Fighting Animals" (Dou Shou Qi) or "Animal Chess". The game Jungle also has pieces (but of animals rather than soldiers) with different ranks and pieces with higher rank capture the pieces with lower rank. The board, with two lakes in the middle, is also remarkably similar to that in Stratego. The major differences between the two games is that in Jungle, the pieces are not hidden from the opponent, and the initial setup is fixed. The roots of the game are similar to Mdm. Hermance Edan's patented invention of "L Attaque" in 1908 in France and Mr. Mogendorff may have drawn his game from this original, but there are some differences. As to the first American appearance, this came from Milton Bradley, who acquired the rights to distribute the game in America. In 1961 they issued a set with numbers on wooden tiles, but a true First appearance was distinguished by the fact that the wooden tiles had a design on the back that looked like vines covering a castle wall. A modern, more elaborate, Chinese game known as Land Battle Chess (Te Zhi Lu Zhan Qi) or Army Chess (Lu Zhan Jun Qi) is a descendant of Jungle, and a cousin of Stratego – the initial setup is not fixed, one's opponent's pieces are hidden, and the basic gameplay is similar (differences include "missile" pieces and a Chinese Chess style board layout with railroads and defensive "camps"; a third player is also typically used as a neutral referee to decide battles between pieces without revealing their identities). An expanded version of the Land Battle Chess game also exists – this adds naval and aircraft pieces and is known as Sea-Land-Air Battle Chess (Hai Lu Kong Zhan Qi).
In its present form Stratego appeared in Europe before World War I as a game called L'attaque. Thierry Depaulis writes on "Ed's Stratego Site":[8]
"It was in fact designed by a lady, Mademoiselle Hermance Edan, who filed a patent for a 'jeu de bataille avec pièces mobiles sur damier' (a battle game with mobile pieces on a gameboard) on 11-26-1908. The patent was released by the French Patent Office in 1909 (patent #396.795 [9]). Hermance Edan had given no name to her game but a French manufacturer named "Au Jeu Retrouvé" was selling the game as L'Attaque as early as 1910... "
Depaulis further notes that the 1910 version divided the armies into red and blue colors. The rules of L'attaque were basically the same as the game we know as Stratego. It featured standing cardboard rectangular pieces, color printed with soldiers who wore contemporary (to 1900) uniforms, not Napoleonic uniforms.
The modern game, with its Napoleonic imagery, was originally manufactured in the Netherlands by Jumbo, and was licensed by the Milton Bradley Company for American distribution, and first introduced in the United States in 1961[10] (although it was trademarked in 1960). The Jumbo Company continues to release European editions, including a three- and four-player version, and a new Cannon piece (which jumps two squares to capture any piece, but loses to any attack against it). It also included some alternate rules such as Barrage (a quicker two-player game with fewer pieces) and Reserves (reinforcements in the three- and four-player games). The four-player version appeared in America in the 1990s.

You must be the oldest woman in the world then?

That's a nice board there Strobe!

thanks! I played stratego when I was.. like 10. (now 18 and found the internet version)
And I wanted to play the board game also. I had no idear that the board game was a a sort of special one. Very proud on my board game.

Wish we had board games like that around here in the USA.  All they have is offshoot games like Fire and Ice or Sci Fi.

but it is too bad. Maybe you will have a board game like this.

Wish we had board games like that around here in the USA.  All they have is offshoot games like Fire and Ice or Sci Fi.

In Europe you get only the new Stratego Original Version ( post 7) The old versions can easily get on ebay but on ebay the   Royal Stratego ( from 1974 ) is rarely sold!

In the UK you can  a new Sci Fi Version (Jumbo) buy or order!

Today I have a very nice version of Stratego from 1992 bought on ebay! 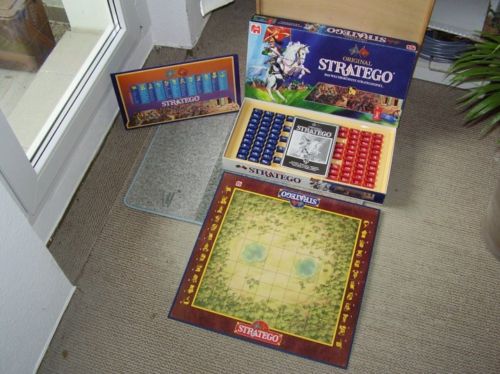 The brown rim in leather look is so special about this edition !