84 replies to this topic

The MT has found Woosmokies guilty of DR, he will have 113 points deducted and you will get 13 points back.

Let me know if you need anything else

The MT has found MOYNAKIAN GKAVLER guilty of Draw refusal, he will have 113 points deducted and you will have 13 points restored.

MT Verdict: Lekker Dan! will be deducted 113 points and JoshJesh will receive 13 points in compensation for this case, pending admin action.

I had a marshall, he has a known marshall and a known scout, all bombs were known too.

MT Verdict: This player will be deducted 113 points and you will receive 13 points in compensation, pending admin action.

I'd like to report Blackened Heart for Draw Refusal.

The second offer came after he ran down his buffer... https://imgur.com/SH8XPyKI

I tried to get him to continue, but I gave up after the third offer was refused, especially since he was waiting for his timer to go red before moving (Wasn't able to capture those images). https://imgur.com/gW7m1u1

The MT has foind Blackened Heart guilty of draw refusal, he will have 113 points deducted from his account while you will have 13 restored.

I'd like to report Pasiphae for draw refusals and time wasting (all in one match).

MT Verdict: Pasiphae will be banned for 1 week for (1st offense) draw refusal in a QA game pending admin action.

Draw refusal, sent to me via WhatsApp, done by Ernest Rutherfor

MT Veredict: The MT has found Ernest Rutherfor guilty of draw refusal, he will have 100 points deducted from his account. No points are given back to Japie69 due to the lack of a Defeat screenshot. 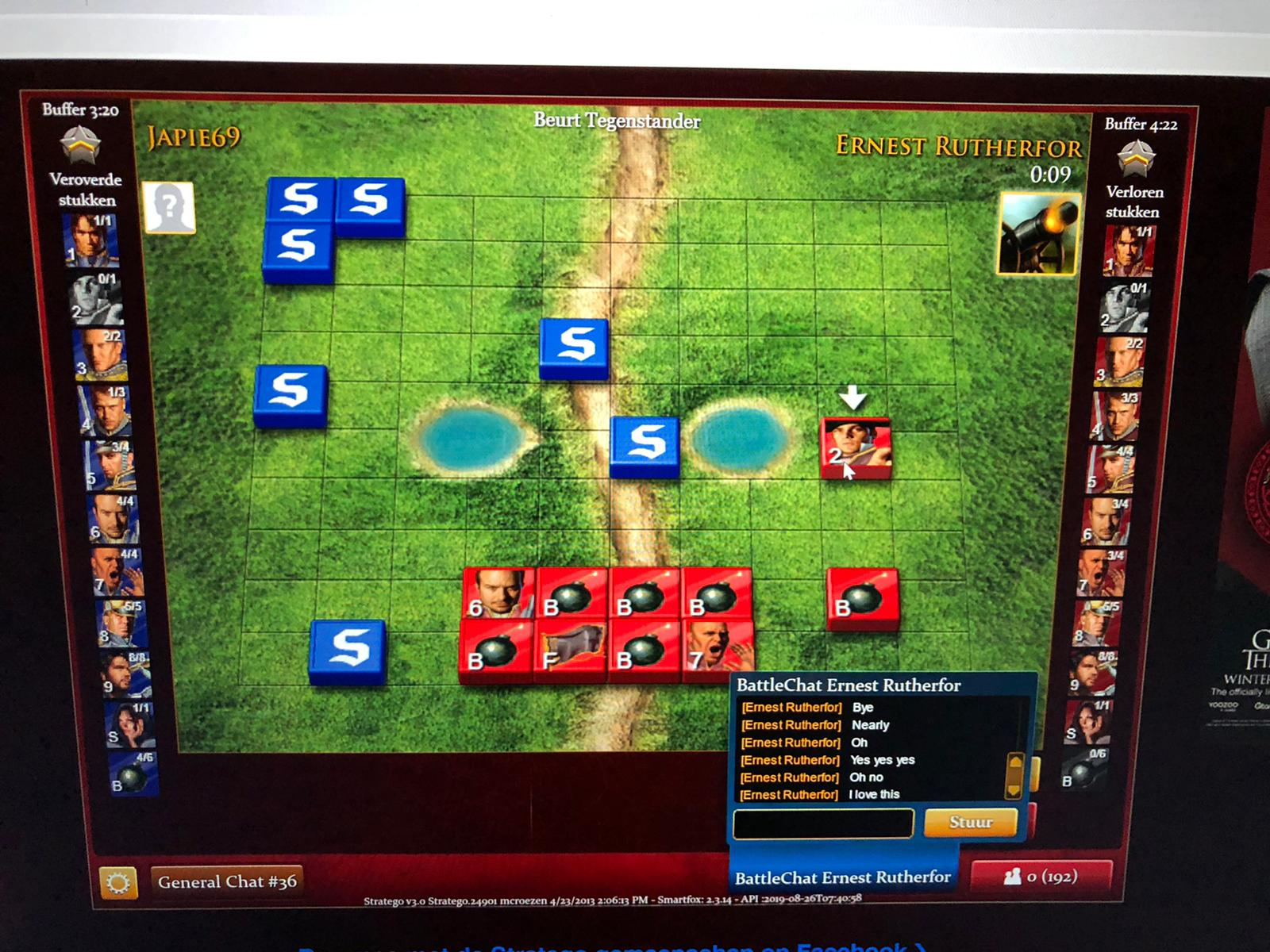 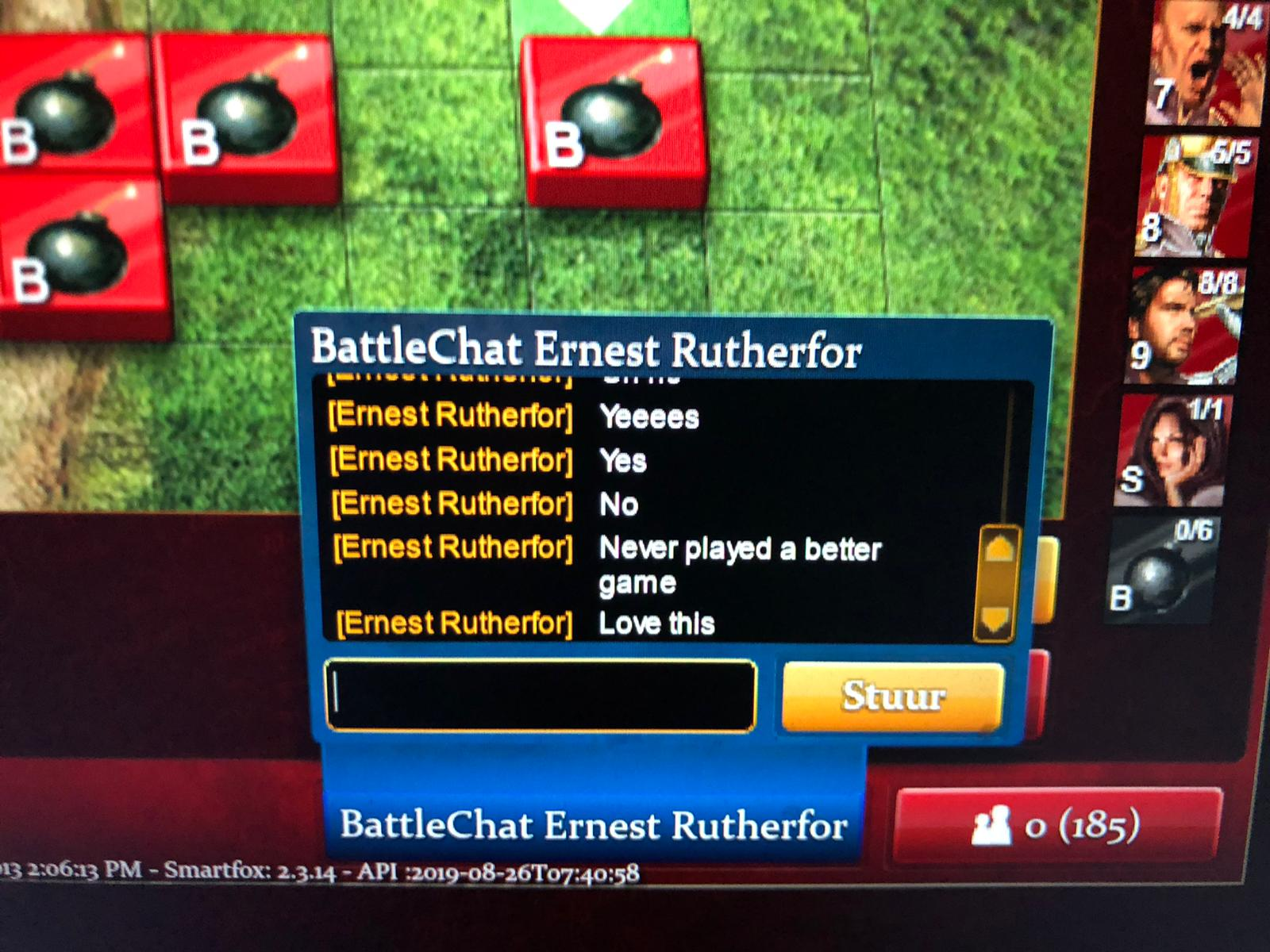 I am reporting KINEGIROS for not accepting tie request and for chasing. 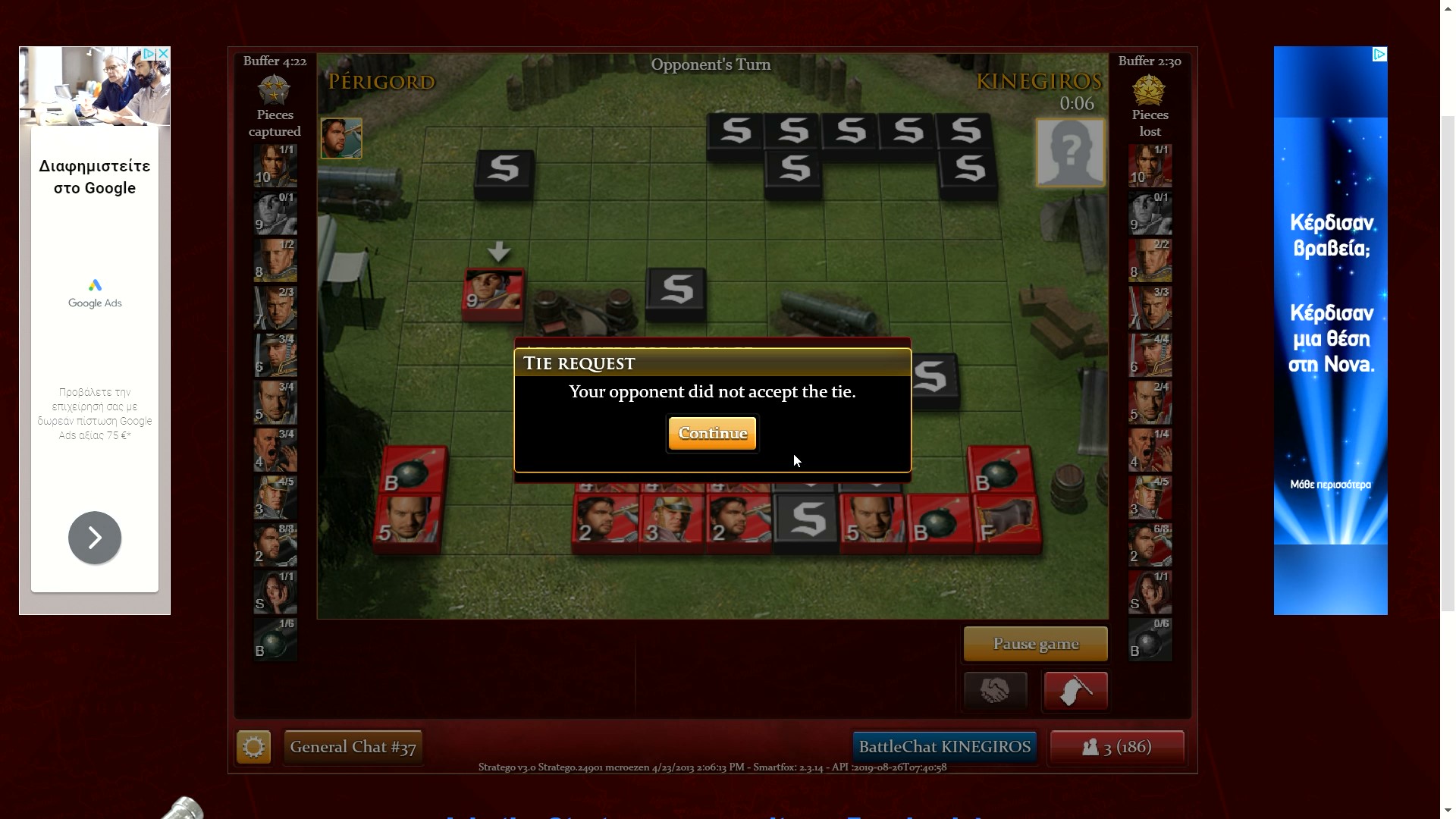 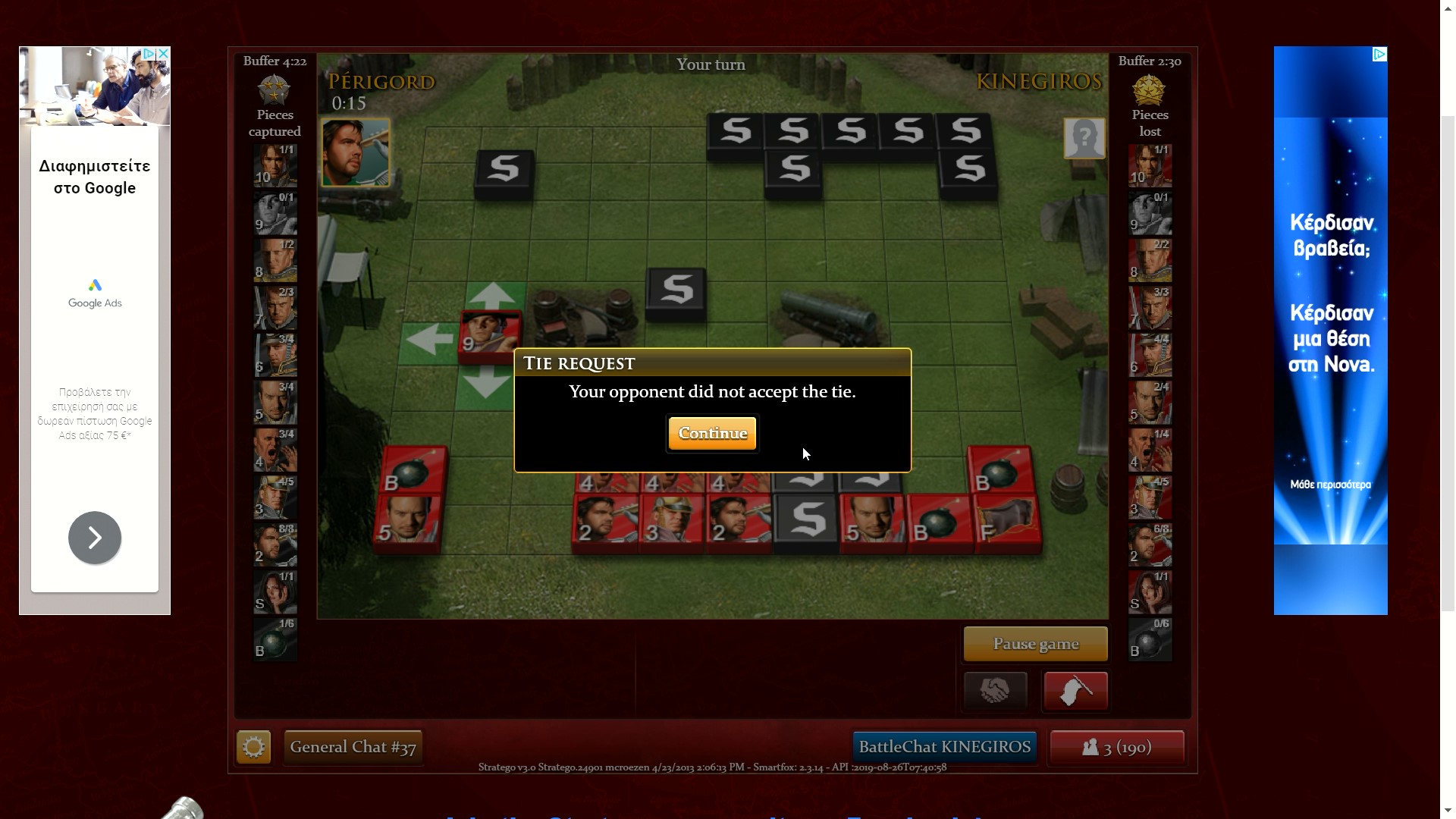 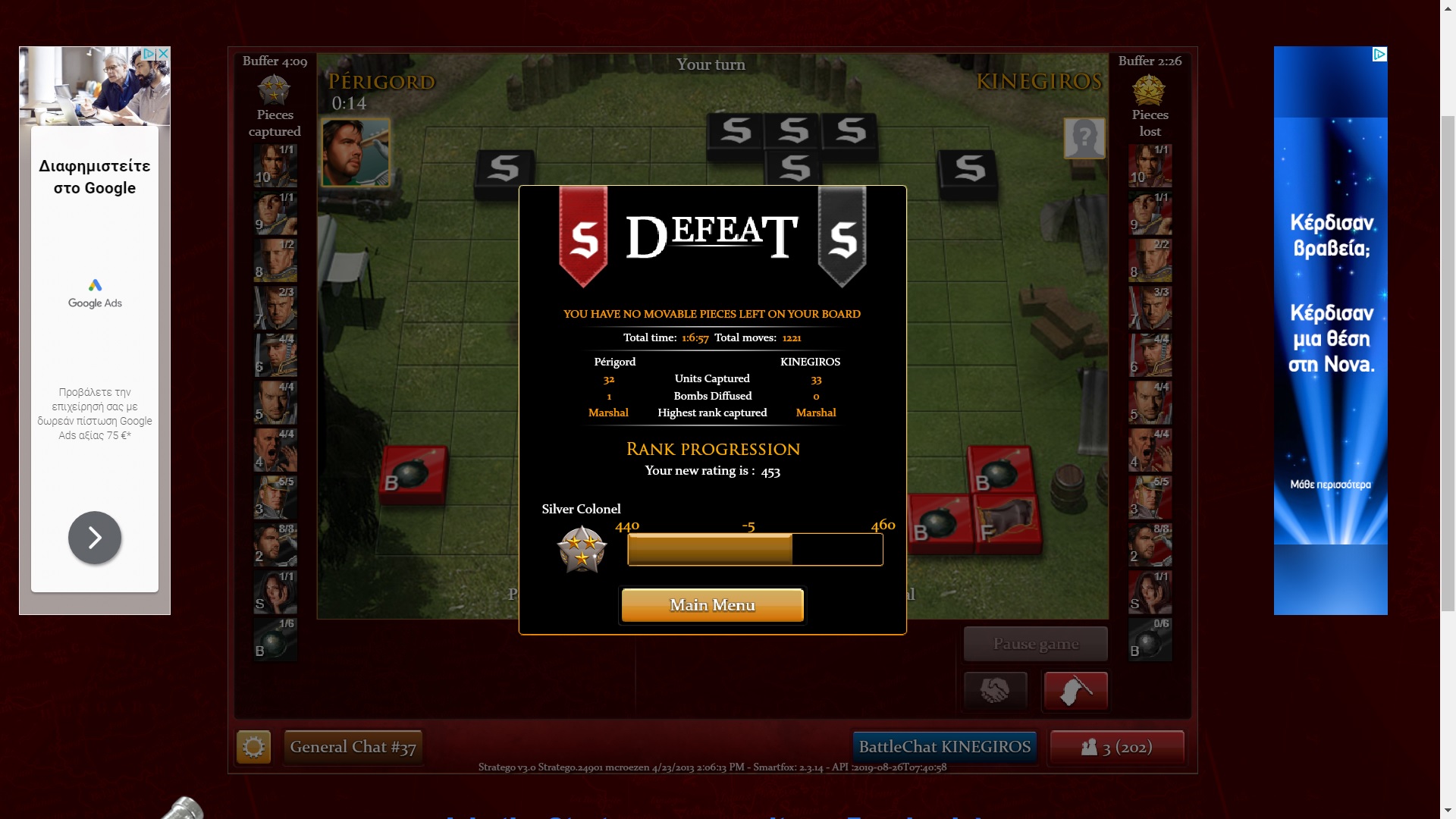 No miners to capture my flag, higher unit General for both players.

The MT has decided to give a no case here, since in the last Screenshot generals are shown to have been captured and we Don't have enaugh time evidence.

Espresso is to Italy, what champagne is to France.
Charles Maurice de Talleyrand-Périgord

I want to report an idiot draw refusel from BartDD.
Only my Marshall and his captain on the board. Been running for ever. He refrused a draw several of times.

MT Veredict: The MT has found BartDD guilty of draw refusal, he will have 113 points deducted from his account while you will have 13 restored.

Because this player has been convicted multiple times, all his accounts will be reset to 100 ELO.

Another infuriating draw refuser: Faffie. I attacked a bit, then he started stalling and didn't accept either draw proposal. Make your penalty swift, mods.

MT Veredict: The MT has found Faffie guilty of draw refusal, he will have 113 points deducted from his account while you will have 13 restored

Also, defeat screen is in his video: https://imgur.com/a/zJgpe5o  (sorry video was sent by PM to MODs.)

I lost my defeat screen shot.

I would like to report 6_6_6_ for draw refusal.
We had a 1 hour + game and there was no attack from him.
Besides i made many attempts to attack and to play normally.

MT Verdict. The MT have ruled this as a No Case. There are substantial changes in the graveyard between the last draw offer and the end screen. 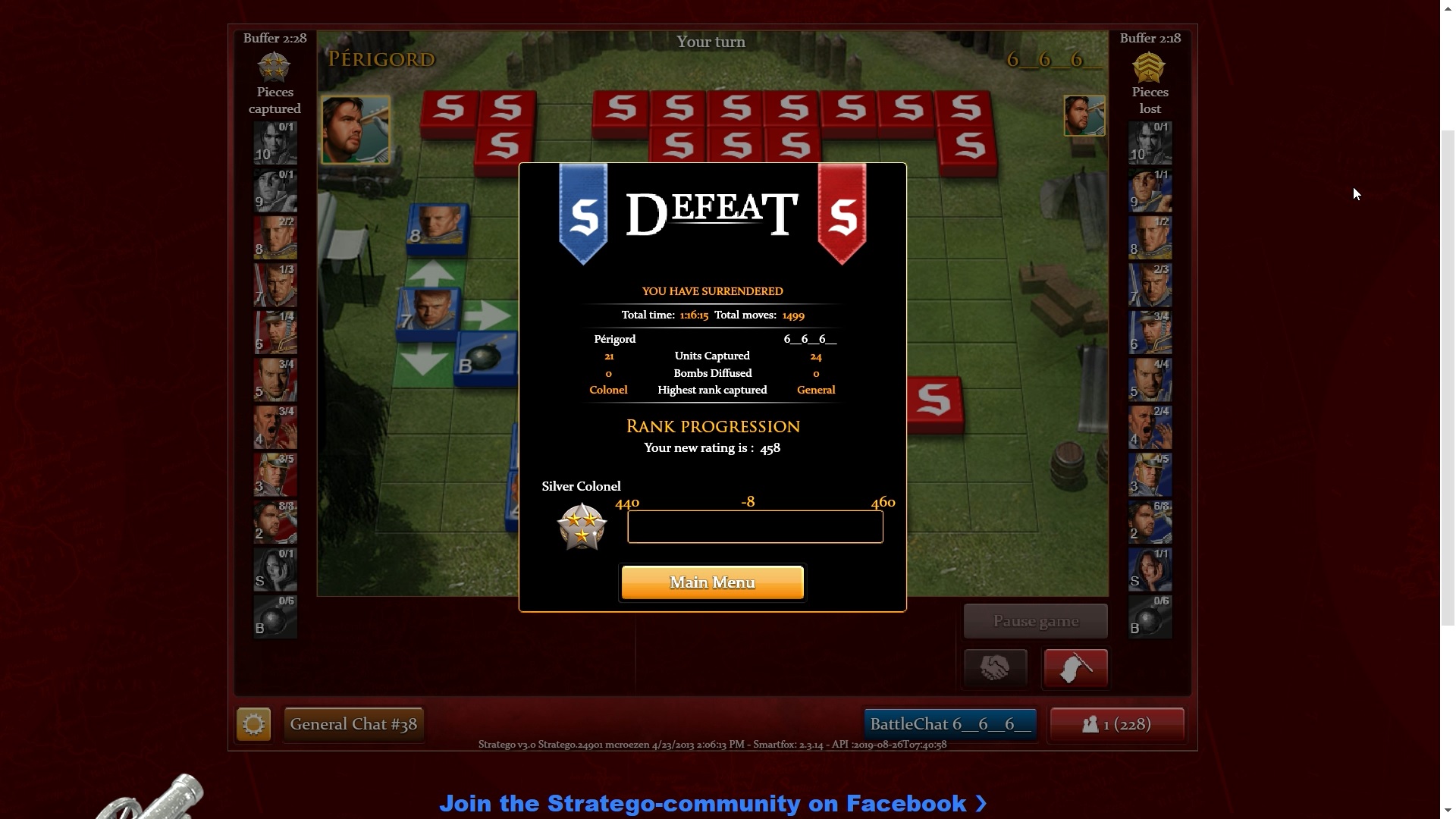 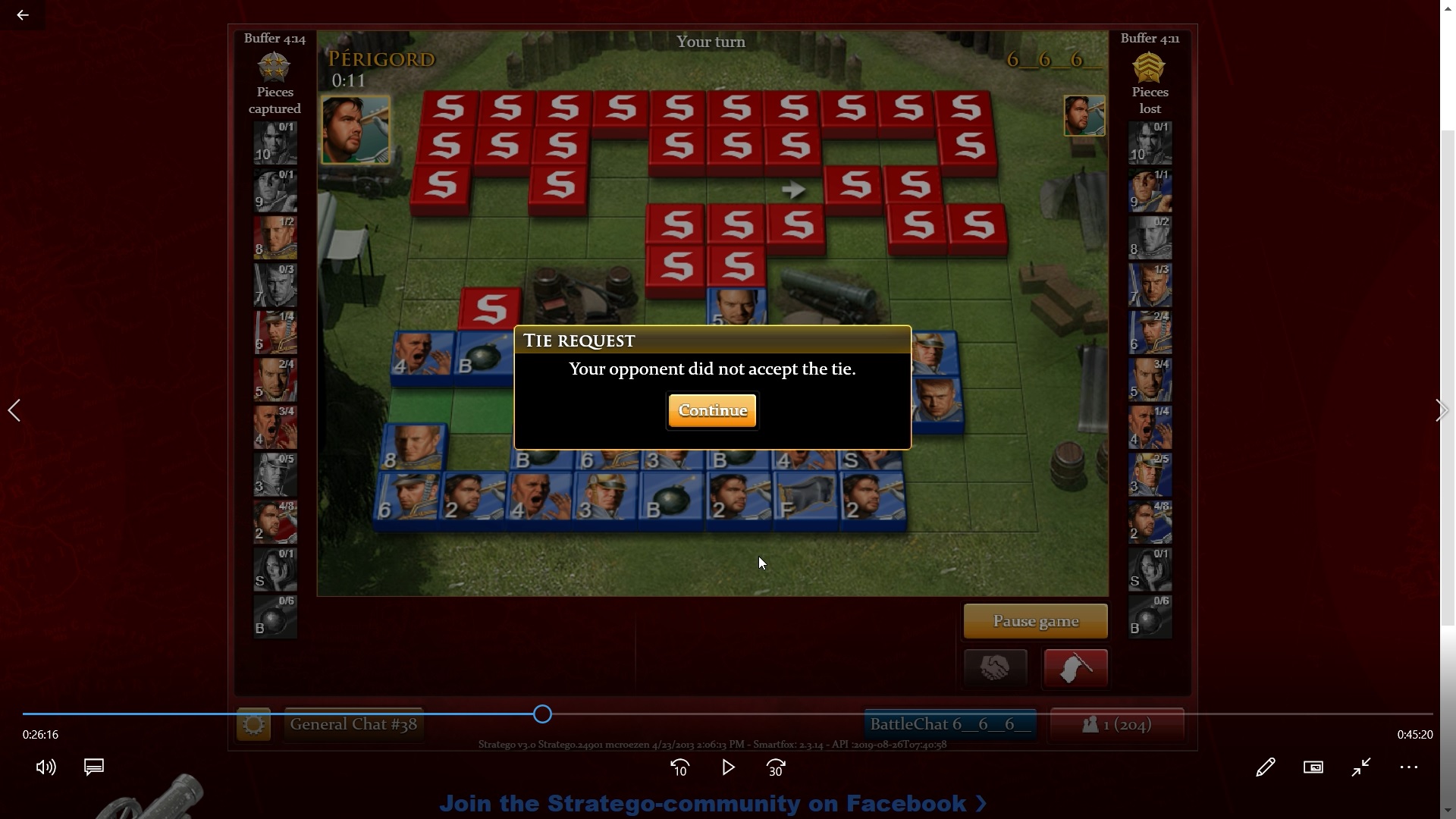 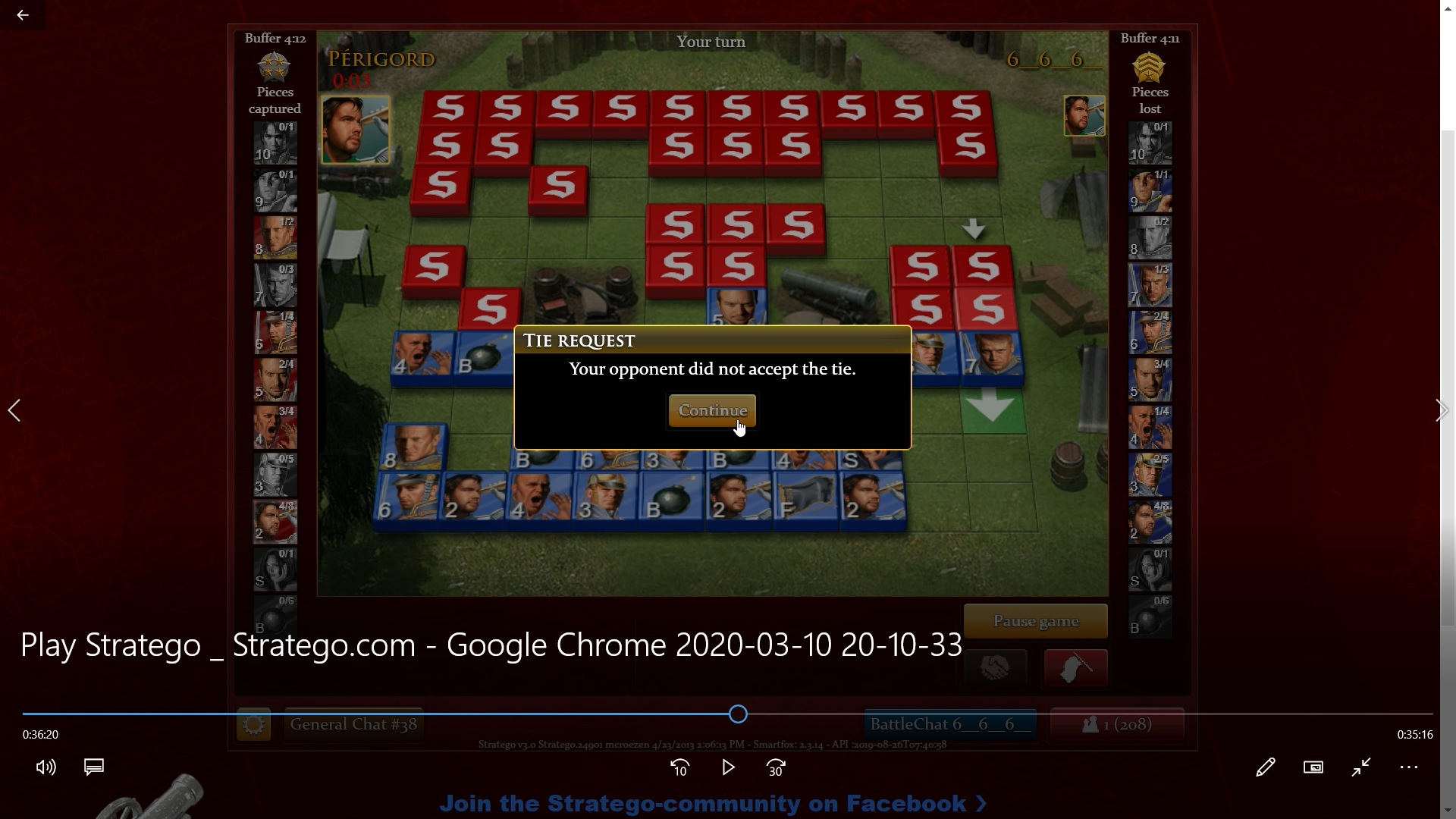 Espresso is to Italy, what champagne is to France.
Charles Maurice de Talleyrand-Périgord

MT Verdict: According to our alias policy (http://forum.strateg...t-alias-policy/) this case won't be judged, as the plaintiff didn't meet the alias declaration requirement that we sent him via PM a week ago.

The MT agrees with you, you will have 13 points restored while your opponent CRAZY DIAMOND will have 113 points deducted. Case closed

He refused all my tie attempts over a long period of time when he clearly couldn't win game / no progress.

MT Verdict: According to our alias policy (http://forum.strateg...t-alias-policy/) this case won't be judged, as the plaintiff didn't meet the alias declaration requirement that we sent him via PM a week ago.

Here's a new clown with an apt name: Heroic Coward.

I attacked a bunch, then be began to stall with his piece behind the right lake. Also called me a nice gendered insult, so I could put this in abusive language too.

See screenshots for everything, including chat.

MT Verdict: Heroic Coward has been found guilty of draw refusal and will have deducted -113 points, while you will have 13 points restored pending admin action.

hi, would like to report Austerlitz 1805 for draw refusal

I got disconnect at the end of the game, losing the graveyard : he has Flag, Major, Capt, Capt

I would like to report VINNEYMAU. He wouldn't accept draw when it's clearly no way he or I could win. We played for more that 2 hours and than i surrendered.

MT note: Request for evidence has been sent by PM.

MT note: Since no evdidence has been added, MT cannot handle this case.

I am reporting Kronk for draw refusal. I have screenshots of my 2nd and 3rd draw refusals, chat, and defeat screens. I apologize for not having the 1st tie refusal, which was a good five minutes before the 2nd. I am still learning the report rules, as in the past I wouldn't bother doing these, and I wasn't expecting this player to just go around in circles over and over. I have more screenshots of Kronk just moving around for 20+ turns that I can upload if that helps. https://imgur.com/a/z9OZbTg

MT verdict:  The MT agrees with you, you will have 13 points restored, while player kronk will have 113 points deducted pending admin action.

I have to report SchaakCampus for Draw refusal.

We were pretty early in the game when he made it clear that he wasn't going to do anything except wait for me to suicidally charge. Disliking this prospect, I offered a tie. He let the timer for the tie tick down.

He then tried to verbally bait me into attacking. I told him he refused my draw to which he replied that refusing to click a selection meant he was not refusing the draw.

I waited the requisite time and offered two more ties (the third of which I failed to capture the image as I didn't save it quickly enough as I as trying to prevent my buffer going down).

May I please have my points back since this player did not actually want to play?

MT Verdict: Your opponent will receive -113 and the warning, you will be restored 13 pts for the game that should've been a draw.