24 replies to this topic

This LIVE tournament is in the provisional stages.

If any Players are interested in experiencing this live tournament please make a post here and the organisation team will notify you of the plans.

To clarify, the Open will be available to all nationalities.

There are also discussions that might involve concessions for overseas players (reduced travel/accommodation costs) - more will follow when it is known.

We are able to offer the following to a limited number of players:

a) On a strictly first-come, first-served basis, we can offer free shared (twin) hotel accommodation at the venue bed & breakfast for the first 4 players travelling from overseas (2 twin rooms) to book for the night of Friday 29th November.

We may be able to offer accommodation to a very limited number of other players with someone living locally - please ask if you are interested in this.
c) We can offer bed and breakfast at the hotel for Fri 29th November at competitive rates - please contact me for more details.

Please reply ASAP regarding any of these. Registration fee for the event: £10. The highest-placed British player in the event will become British Champion.

Parking is free for participants.

We will be using a clock of 12 minutes per player with 4 second Bronstein delay per move; 5 minutes' setup time and 50 minutes' play time on the round timer for each round. Games will use the ISF Kleier ratings.

Prizegiving as soon as possible after last round is completed

> Prizegiving as soon as possible after last round is completed

what are the prizes?

I know I'm young, but my mind is well beyond my years.

I think a list of confirmed participants is going to attract more players.

There are another 5-7 players to add to those three who don’t play much online - including Ace72 (Richard Ratcliffe) and Jonathon Arnott.

How many players are expected now?

Do we have any idea about whether there are any foreign players participating? I'd like to see some Dutch players take part; they don't even need to travel by plane, they can simply take the train.

Eurostar & picc. Fairly simple really. Don't get heathrow express its a rip off

It was a pleasure to be able to meet everyone at the UK Open event. It was a fantastic event with many memorable moments.

Friday evening I traveled down to the hotel and played a few barrage games. These were all fun. There were a lot of mindgames for the barrage games. Where is the flag?

Sometimes I played it in the corner, but sometimes not. I had one memorabl ope game where I had it on E4 and my opponent, Richard had his flag on F7. I won, with a lucky guess with my scout at the end. It was funny in the end when we both realised we did the same silly little setup.

Saturday morning, we only had 7 players as one of the players, Chris, had to drop out to enter a poker tournament. So we set up the boards and the first pairing was announced.

Round 1: vs Jonathan Arnott
I was contemplating an all out blitz attack this game, as I know Jonathan plays very slow and defensive and therefore has a penchant for draws. In the end I chose not to, but I decided to make a fairly standard setup with the pieces positioned for an attack should I feel inclined. In the game, I read Jonathan's style perfectly and had a completely winning position. However, the challenge was the clock and I needed to capture the flag in just under 30 mins otherwise it would take too long. I managed to capture his flag with just 5 minutes to spare. It was the last placed I checked

Round 2: vs Nikos Kouvatsos
I know Nick is an attacking player like me and makes bold assumptions. In this game I decided to switch things up and play a more bluffing, unpredictable game. I got a good start to the game by scouting his Marshal. I eventually was a cap ahead with most pieces traded. It was still close though, and anything could have happened. At one critical point in the game, Nick was forced into a decision. We both had an unknown col (marsh gen col x1 traded) and I forced him to guess my other col which he guessed wrong. After that, unfortunately the game was almost over for him.

Round 3: vs Charlie Palley
I think Charlie's the most unpredictable opponent of the bunch. I decided to match his style with a similarly weird setup. Things were going very well for me, I was 2 caps 2 lueys up but my pieces were known but I was sure I knew his pieces too. I looked at the clock and 30 minutes were left so I thought, if I wanted to convert this into a win, I should act upon my assumption about where I thought his Marshal came from. I decided to do this as I was concerned it may be a draw otherwise. Unfortunately as it transpires, my guess was wrong and I lost my general with about 25 mins to go, but at this point I knew his General too. I sacced my marshal on his gen, which he took with spy, and played on a bit. Charlie's flag was sealed and I couldnt get a miner to where it was. My flag was also sealed, which Charlie could have got at one point in a game, but he guessed wrong with his miner and some of his pieces. In the endgame, we agreed to a draw by time.

Round 4: Anthony Melbourne
This was a bit of a disaster game for Anthony. I was ahead two major pieces and was able to force trades and defend the game out. In an effort to make something happen, Anthony had to attack but he hit a bomb on his first attempt. Unlucky, but these bad games happen as I'll soon find out.

Round 5: vs Richard Ratcliffe
I anticipated Richard to play conservatively so I made a straightforward setup but with an open flag in an unusual place. Unluckily for me, Richard opens by Marshal blitzing my flag side. I was faced with a difficult decision here. If I started through the centre I would be too slow. He would find my flag. So I decided to trade Marshals and Generals even though I was down 2 ranks. I lottoed some pieces back with my colonel and left what I thought was the flag within easy grasp. I would have my colonel locked, then send a miner up to the flag. I thought I had the win against all odds

He made a 'sigh' and finally offered ro trade cols which I accepted as I thought I would get the flag. Sadly for me; I was wrong. I'm now a major and a captain down and I just traded cols. I'm not ahead too many small pieces either. Not enough. So in this endgame I calculated by his degensive nature his flag must be open. I just had to sneak a major through to hit it. So I bluffed. A lot. I threw everything I had as a bluff to capture his smaller pieces and leave him guessing. After a few minutes, he did manage to find my majors and I lost.

Game 6: vs David Pearce
Going into this game, there was a problem with the swiss pairing and the rounds had to be done manually as the draw was locked. The scores were close. If Charlie won I'd be 2nd but if Charlie lost I would win. So before this game started I gave Richard some words of encouragement to win in that crucial game

In this game I decided to play it safe as David isn't quite as strong as the other competitors. I got a good advantage early on and also found a lot of his bombs easily, so I was able to win quickly here.

Richard did manage to beat Charlie in the last game, so I took first place at the end.

After the game we had a nice chat and issued the prizes to each winner and also took a group photo. The photo will be posted by TheOptician later. It was a great tournament, I am pleased to have taken part.

Congrats! and thanks for the report

Congrats to Unladen Swallow who takes the title ahead of Major Nelson on head-to-head.

The best leaderboard quality picture in the world, probably. (A better one will follow) 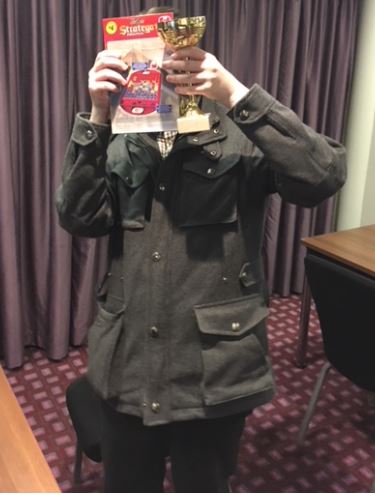 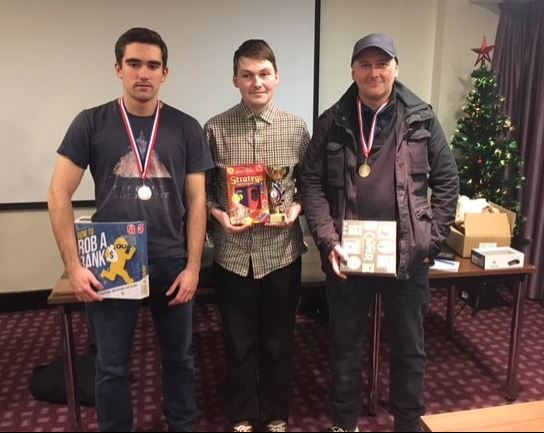 The Top 3 (from left to right: Nikos - Major Nelson, Josh - Unladen Swallow, Richard - Ace72) are beaming. Nice touch from organiser Jon Arnott to add - like a flag - the Christmas Tree in the corner. Nikos was worried that his board game prize might draw attention from the authorities on the way home.

There's a group photo to come.

Lol you published that photo you took of me

Nice summary, US! Congrats with your 2nd(?) national title! Nice to see it was so close. So TheO could win the tournament if he won the last (tough) round?