1 reply to this topic

Seeding for the Champions League 2019 will be determined as follows:

For each of KLEIER, HOPPI and ASR, players are awarded a RANK.

Example:  gkaros is 6th in the HOPPI rankings, 8th in KLEIER rankings, and 18th in ASR rankings, earning a RANK of 6,8 and 18 respectively.

However, the most recently published ranking will be used at the time of the draw.

Note that only players who have a ranking in 2 of the 3 available ranking systems are eligible to be seeded.

Remaining players who are not eligible for seeding will be seeded in order of Current ELO on Sunday April 28th when the draw is made.

Questions about seeding can be asked in the Questions thread:

The Top 2 from each group qualify for the Last 16.

Seeding Table is below 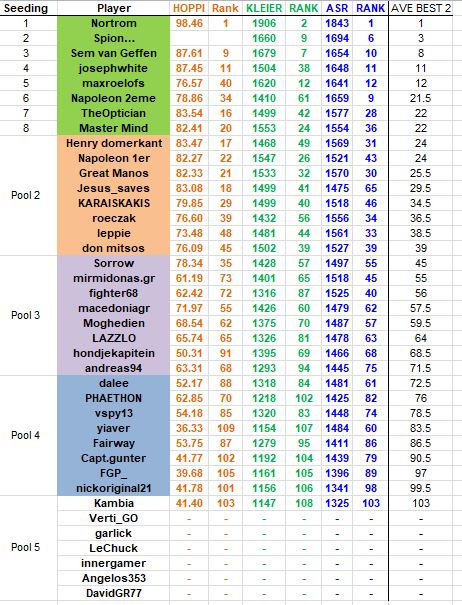 Back to TC Archive