17 replies to this topic

Match PM's for matches 1-7 have been sent out. Find the pairings Here

All match PM's have been sent out. If you did not receive one, please let us know.

Also make sure that during the WCO you have sufficient inbox space.

Breakdown of players by nationality: 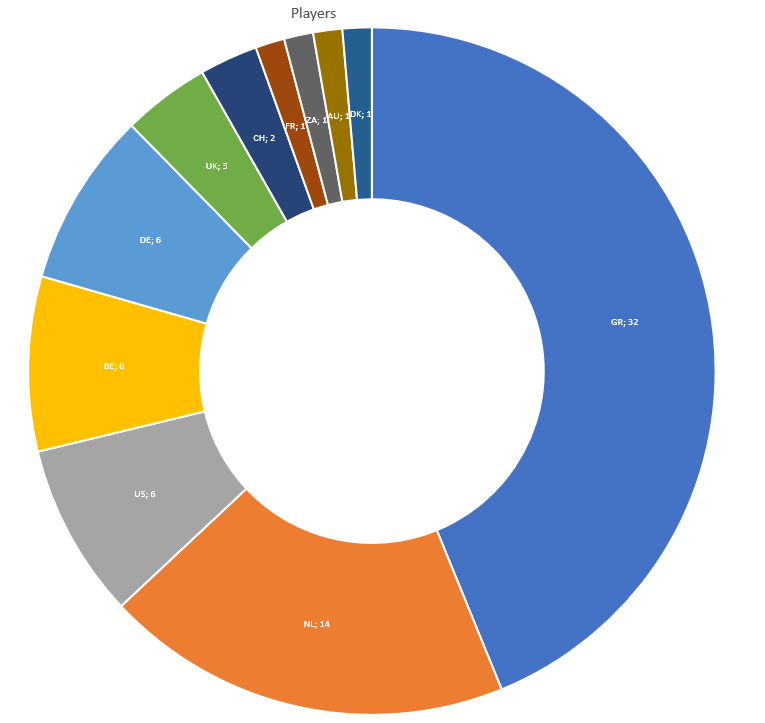 The first round of the WCO has concluded. Many closes games were had. The first draw of the tournament took place on virtual board #5, where Henry Domerkant and losermaker got to a draw in which is said to have been a game which could have gone either way.
On the higher virtual boards we have seen no mistakes yet, but surely this will change in the upcoming round.
In the second round some interesting matches are scheduled.
Hielco, who almost was unthroned on the leaderboards, takes on Astros. In the meantime, we have a captain major battle between OVERLORD and Great Manos. Will Great Manos be able to pull of a stunt? we think he's certainly capable of doing so.
At virtual board 9 we have two Dutch contenders, Morx and Moghedien looking to keep their 100% score, while at virtual board 19 there is a rematch of the Astros Survivor Series, maxroelofs vs. Henry Domerkant

It would be nice to have you again in our community. I hope to see you soon on the battlefield, mate! ☺

After quite a lot of surprising results, proving that many players have not only improved, but are capable of holding their nerves too, we now arrive in the fifth round of the WCO 2018/19.
Three players are without loss of any points, while seven players have not lost a single game ( 3x 4-0-0, 2x 3-0-1, 2x 3-0-2 ). During this round a few of those players will be matched against each other.
Some matches to look out for:
2: Napoleon 1er

Last year's #2, Napoleon, who went all the way to Naarden to retrieve his prizes faces off with Losermaker, who had his prizes shredded to bits delivered by mail. This year they'll go to battle as current #2 and #5. Anyone willing to predict the outcome of this game?
7: dutchkillers

A veteran Dutch player against a relatively new, but definitely a prodigy, Dutch player. Who do you favor to win? Dutchkillers seems to have a slight edge based on his name.
11: Hielco

It is a surprise to see those two fine players put at virtual board #11. Local WCO newspaper predicts that this game will go to the wire nonetheless.
16: Jesus_saves

The strength of the players shows once again when looking at the names and seeing those two paired up against each other at virtual board #16. Both players were most likely hoping to have a slightly higher standing, we wish both players the best for this round (and following rounds of course).
26: hellinon

With so many Greek participants, a confrontation between two fellow countrymen, wait, did we say men? Kambia having won the "Female player of the year" award this year and this being her 4th WCO, we expect nothing but a game that goes down to the very last pieces between those two excellent players.
Stay tuned to see how this round unfolds.

In the final round of the WCO we still have quite a number of candidates for the title.

If OVERLORD does not win here there are 4 other candidates:

Napoleon 1er who came to the Live World Championship 2018 to pick up his WCO medal from last year,  is playing against NASF secret weapon Fks on board 3.

I think this is one of the most international last round for high positions at  the WCO yet, with players from Greece, Australia, the USA, Switzerland, Germany and The Netherlands in the first 10 spots.

Will OVERLORD bring home another big medal for Greece or will gkaros go for the title again?

Alternatively will this be the first time an Australian, Swiss or US player takes the number 1 spot in the most prestigious online Stratego tournament of the year?

With losermaker winning against texaspete, there are only 2 left for the title and losermaker does secure his 2nd WCO medal.

Tonight gkaros played against Overlord in the decisive game for the WCO4 title.

With the result of this game, we have a new WCO winner, congratulations to Overlord for winning his final match and with this winning the tournament!

The WCO team will be in touch about the logistics of the medals.

Interesting to note, is that the winners are coming from NL - GR - NL - GR is starting to become a little tradition. Will this continue next year?

Of course, last but not least, congrats to those who played a fun tournament and hopefully will be joining again next year.

Thanks for organisation and congrats john!