How to effectively attack.


27 replies to this topic

Hi all. I’m pretty new to this game and have found that my greatest struggle is mounting an effective attack. I can defend fairly well imo, but without a good offense, I feel like I’m playing catch-up the whole game. What can I do to improve? Thanks!

Welcome to the site and forum!

Attacking is a subject that has been a problem for many people. Myself included. I like to hang back and be defensive.

Much has been written in these forum pages about the subject but it seems not in awhile. So thanks for posting the question this time. And good luck improving!

Hello FedEx- I first started out going on offence with a 7-8-3 combo. The colonel to get pieces a miner for bombs and expendable. I then found myself down a colonel due to opponents, General/Marshal but would get info on opponent. This worked for a certain level of game play. The more games I played the more I paid attention to my opponents game play and how they moved in on me-their offence. What I came to grasp was that all players use different  styles. I needed to learn the players ! The forum was great place for information and intel . A fine group of players much better than I  post videos on this subject on YouTube--give these a shot maybe catch a stream someday.My last thoughts on this matter is find a friend and get a bunch of matchs going between yourselves, this way you can get good feedback from someone you trust and the matchs will not effect your rank

i wouldn't recommend becoming a marsh charging lottoer which seems to be a popular strategy around here that isn't going to work! there are to many strategies to discuss or single out, the one word that comes to my mind is methodical. think of it from a military standpoint. do you think george washington went charging in first by himself in any battles against the redcoats?

Stratego is about Strategy, not war. This is from Sun Tzu... "Victorious warriors win first then go to war. Defeated warriors go to war first, then seek to win. "

Here is another one by Sun Tzu:

"Know your enemy, and know yourself, and you can fight 100 battles without disaster".

I believe attacking well is mostly about knowing your opponent, or atleast their style. If I am choosing to attack, I try to figure out within the first 10-15 moves wether they are a confident aggressive player or a defensive one that would rather play safe.

Stratego is about Strategy, not war.

This is from Sun Tzu... "Victorious warriors win first then go to war. Defeated warriors go to war first, then seek to win. "


That's a very good quote ... you should add it in the off topic quote of the day

That's a very good quote ... you should add it in the off topic quote of the day

18. All warfare is based on deception.

20. Hold out baits to entice the enemy. Feign disorder, and crush him.

21. If he is secure at all points, be prepared for him. If he is in superior strength, evade him.

22. If your opponent is of choleric temper, seek to irritate him. Pretend to be weak, that he may grow arrogant.

23. If he is taking his ease, give him no rest. If his forces are united, separate them.

24. Attack him where he is unprepared, appear where you are not expected.

25. These military devices, leading to victory, must not be divulged beforehand.

Sun Tzu also knew about lane control, shufflers, good setups, and about not moving to many weak pieces:

8. With regard to narrow passes, if you can occupy them first, let them be strongly garrisoned and await the advent of the enemy.

9. Should the army forestall you in occupying a pass, do not go after him if the pass is fully garrisoned, but only if it is weakly garrisoned.

10. With regard to precipitous heights, if you are beforehand with your adversary, you should occupy the raised and sunny spots, and there wait for him to come up.

11. If the enemy has occupied them before you, do not follow him, but retreat and try to entice him away.

12. If you are situated at a great distance from the enemy, and the strength of the two armies is equal, it is not easy to provoke a battle, and fighting will be to your disadvantage.


18. When the general is weak and without authority; when his orders are not clear and distinct; when there are no fixes duties assigned to officers and men, and the ranks are formed in a slovenly haphazard manner, the result is utter disorganization.

19. When a general, unable to estimate the enemy's strength, allows an inferior force to engage a larger one, or hurls a weak detachment against a powerful one, and neglects to place picked soldiers in the front rank, the result must be rout.

I think attacking is a very complex matter about which much can be said.

Let's start with pointing out that a successful attack that is not a blitz almost never goes via only one lane. You need 2 or three lanes at least to pull of a good attack. Now after you do some scouting, you try to get to a position which I like to refer to as ''domino attacking'', meaning that an attack on one side of the board helps you to determine your next attack on the other side of the board. I will explain this in some more detail:

For this to work you really need to have some information, so this is not a strategy that will work from the start. This is a midgame-strategy, a position on the board that you want to enforce during your game.

Step 2: Put pressure on the opponent

Now that you have figured out a major for example, try to sneak in some pieces, in the ideal situation you will be able to put a kolonel in front of that major with his major being stuck there. For this example let's say this is happening on the right side of the board. This will likely happen versus lower players, but will be hard to accomplish versus higher players. Now that you have a kolonel in front of a major you have a very strong weapon. The major is likely to be covered by either your opponents marshal, or the opponents general. In case it isn't, you can take it later on with the major, for free. Now the proces of getting more information is starting, you can attack on the other side of the board with a major and say that you figure our your opponents general, what happens next?

You just lost a major to your opponents general on the left side of the board, on the right side you still have a kolonel in front of the opponents major, now you can manoevre your general to the middle in case he has some moved pieces there (best case scenario: a kolonel), you can attack with your kolonel on the right side to take out his major, and either get the major for free, or get killed by the opponents marshal (the general was exposed on the left). This brings you to the next step of the sequence: taking out the pieces in the middle, best case scenario a kolonel.

Now if you know for sure that you can find a kolonel in the middle, this is a 100% advantage situation, but there is a big grey area to it as well. Very often you will have to combine this domino attacking with an estimation of the likelihood of the pieces being exactly in the right spot for your opponent to save himself from everything.

Last thing I want to say about this for now is that this strategy might not always get you an advantage in pieces straight away. You did lose a major and a kolonel in the example, and you did take back a major and a (let's say it was a kolonel in the middle) kolonel. So that is equal right? Of course this is wrong, where your opponent has figured out your general, you have figured out your opponents general + marshal, a huge advantage.

This is just the very basis of domino attacking, as mentioned before there is a huge grey area with this many many more factors come into play.

... finally somebody who understands what this forum is about ...

Very well explained max, that stuff is hard to put into words and you have done a great job there!

I agree with Losermaker that it's all about knowing your opponent. Personally, when I play against someone for the first time I have a relatively attacking style, making much use of colonels and majors. One could say that this is the style that comes to me naturally. But if I've played several times against a specific player I try to change my approach in order not to be predictable, eg I may choose to attack with the general/marshal, or I can try a completely different, more defensive approach, with many low-value pieces in the beginning and bluffs. This game is a constant competition of who can surprise the opponent better, so try new things.

Great topic! Thanks for posting. I am not a very good attacker, but I have found that I despise just playing defense. The attack described above by Max is the way I usually attack, sometimes with a good result, sometimes not.

"If you know the enemy and know yourself you do not have to fear the result of a hundred battles."

That is contributed to Sun Tzu.

Notice that Major Nelson is saying something similar applied to Stratego:

"I agree with Losermaker that it's all about knowing your opponent"

In my library is a copy of the Art of War. Some of the principles can be directly translated into Stratego, others need deep understanding of language and the game.

6 years ago I started writing some documents about various topics. I haven't read them again, just screenshotted the parts I found worthwhile based on the name of the chapters. There is more, but this is enough for now.

Unlike some other documents floating around here, this is actually written by a 4 times live WC without fabricated stories. The background may, especially on the screenshots, slightly annoying. Enjoy. 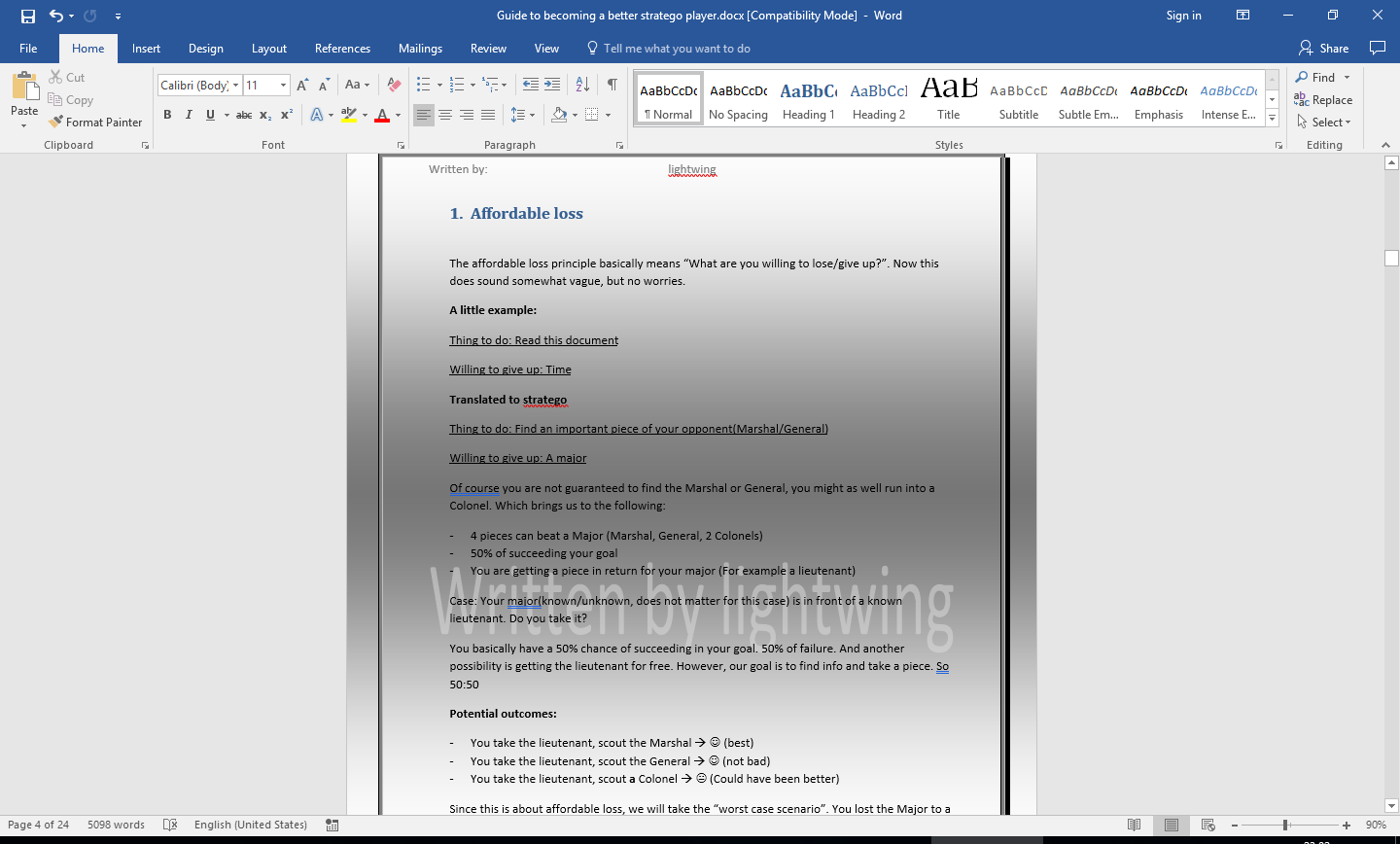 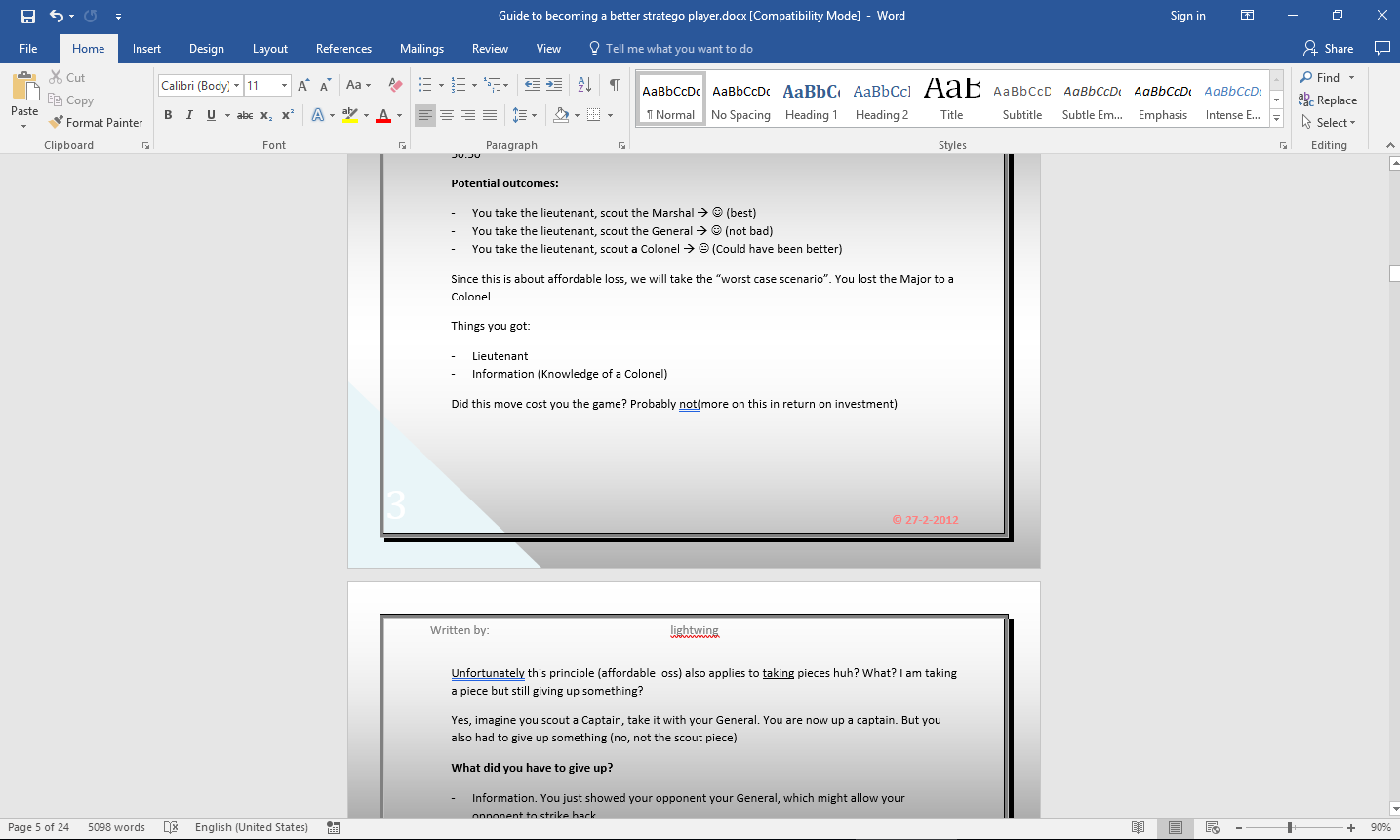 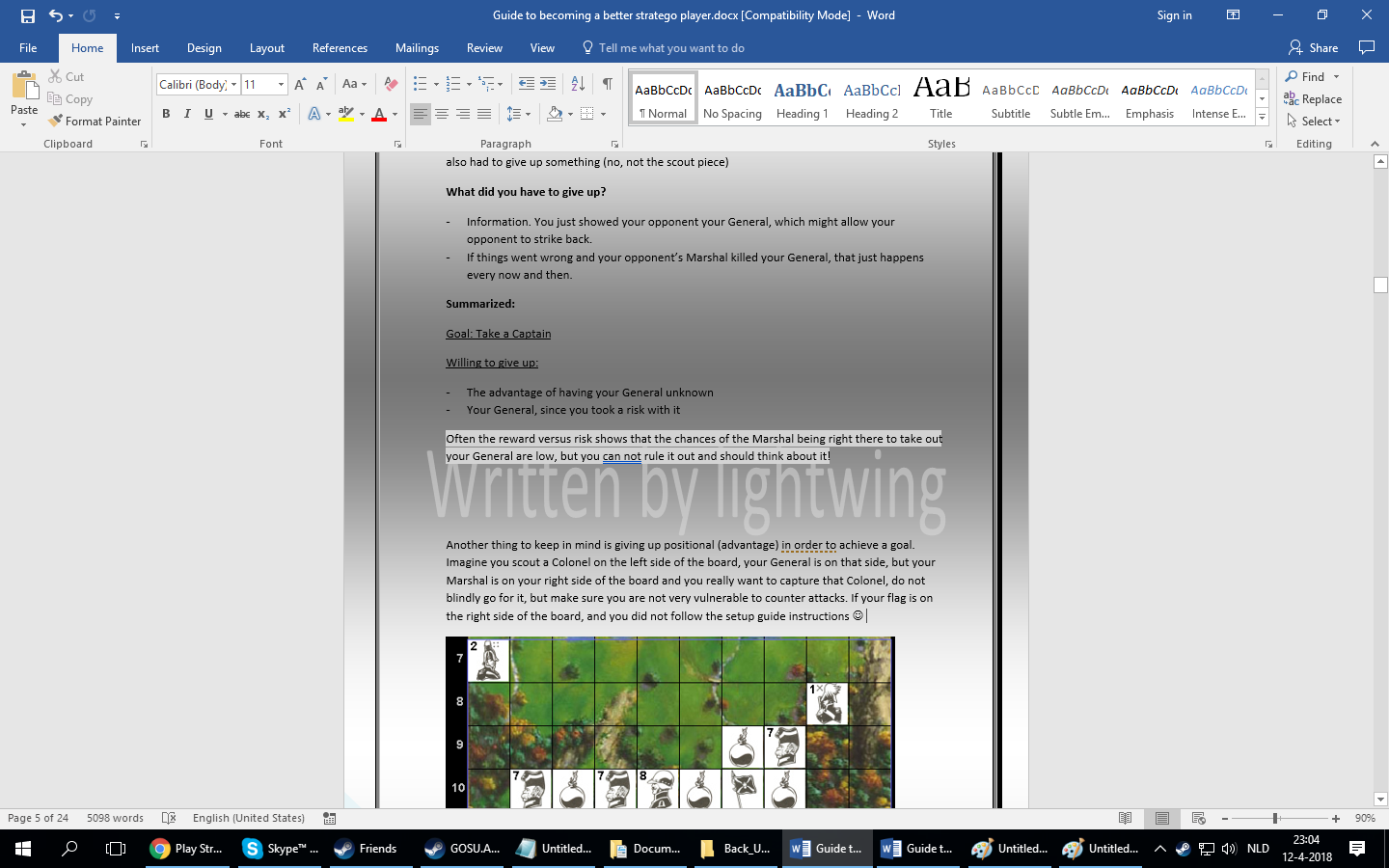 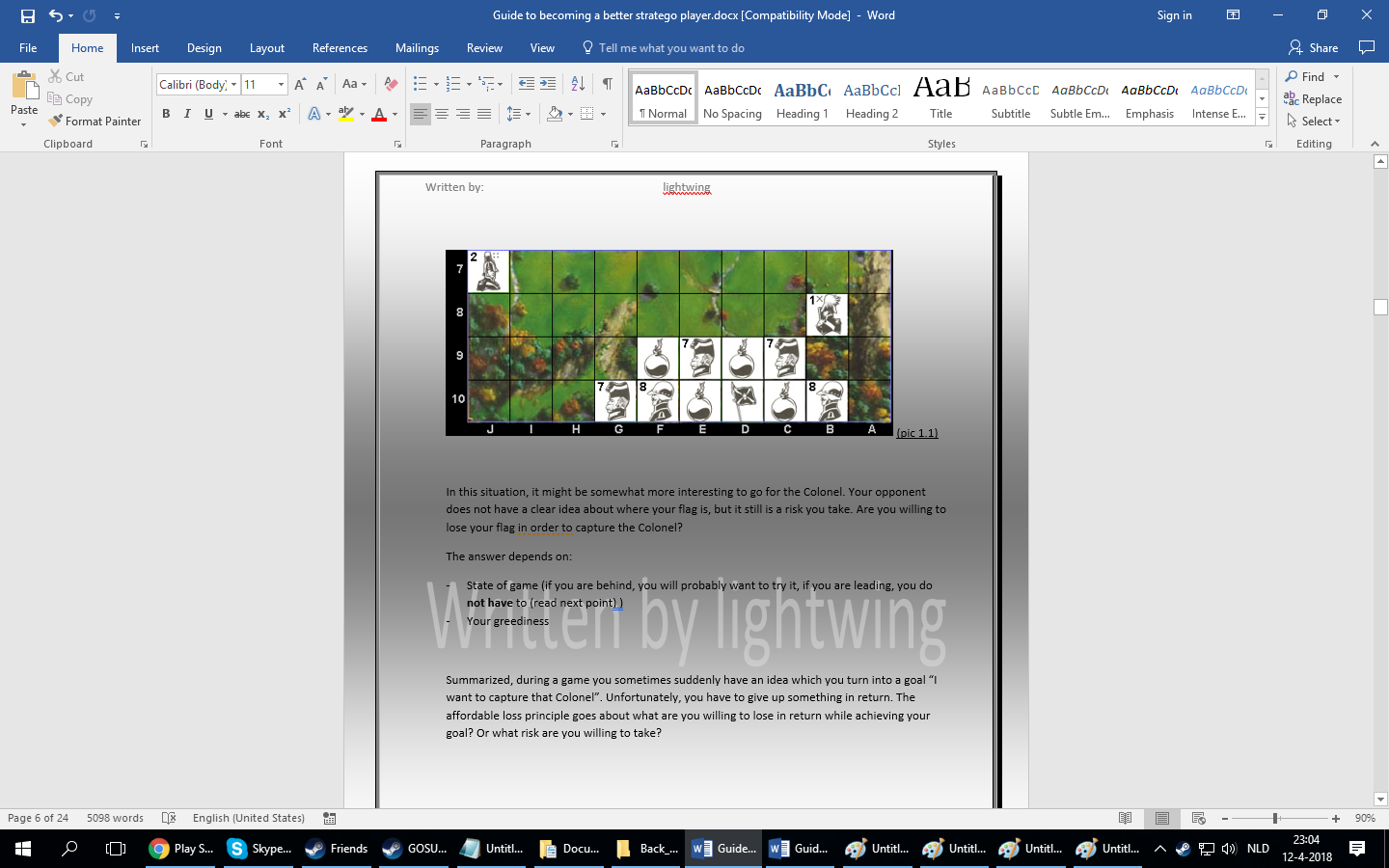 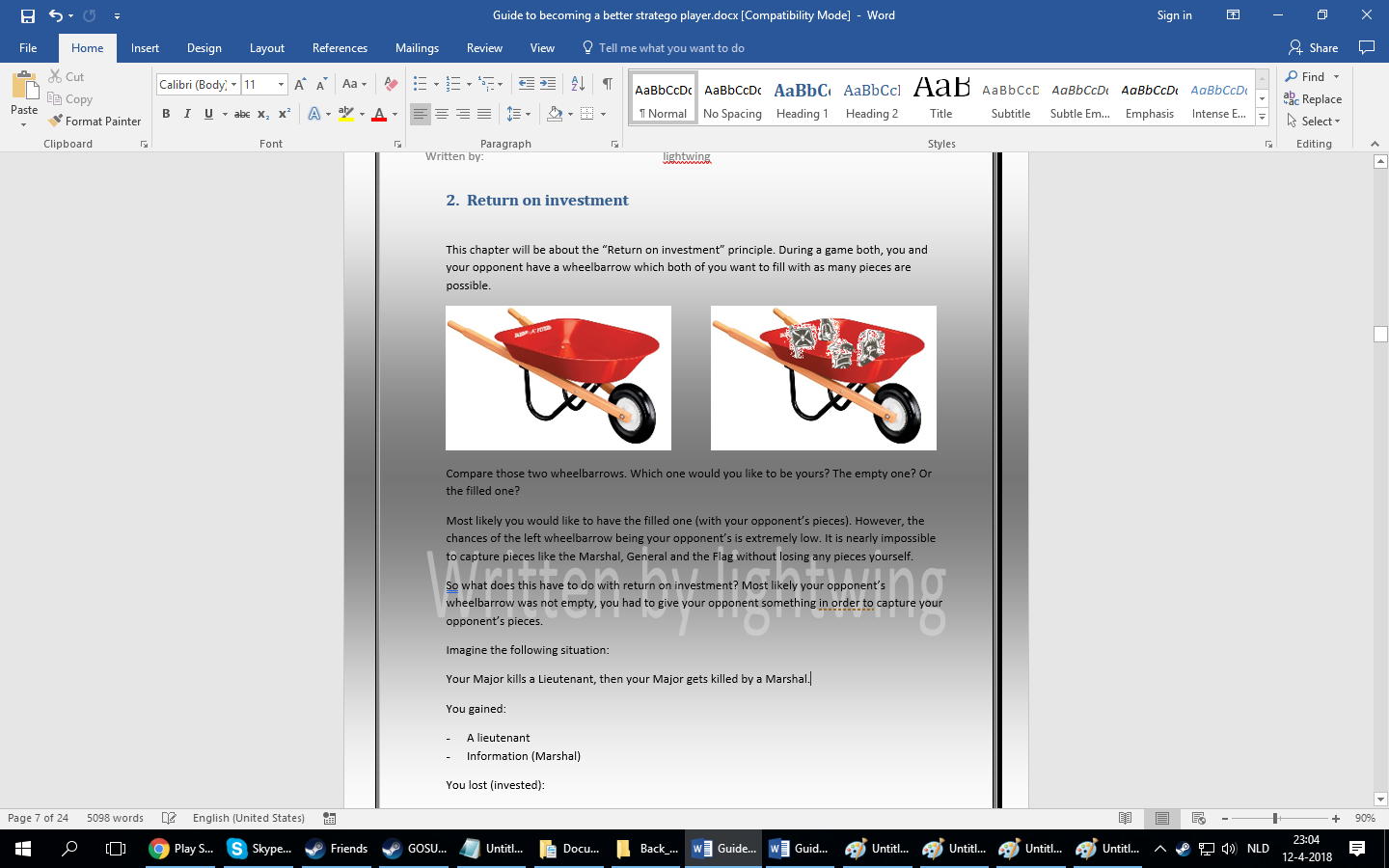 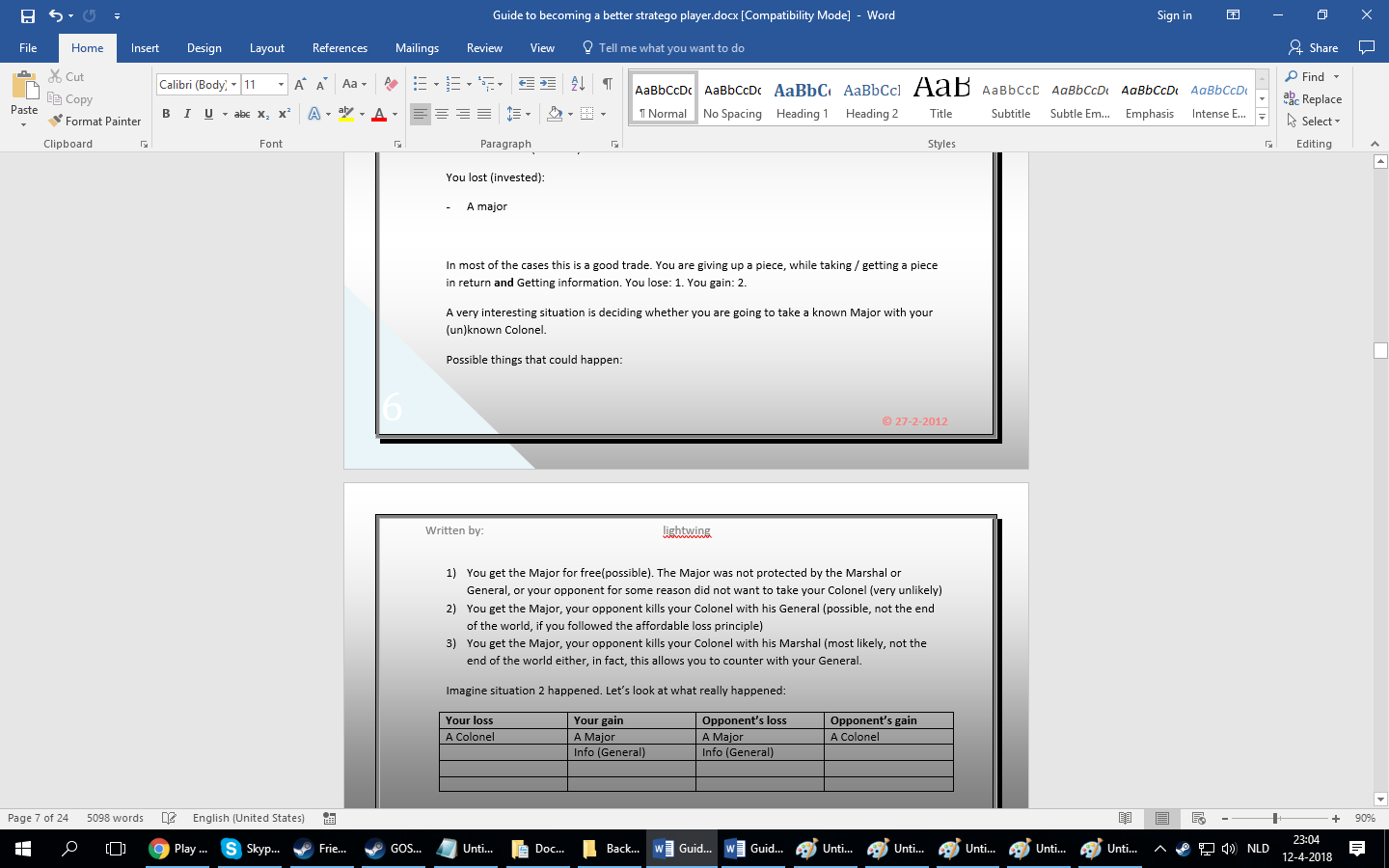 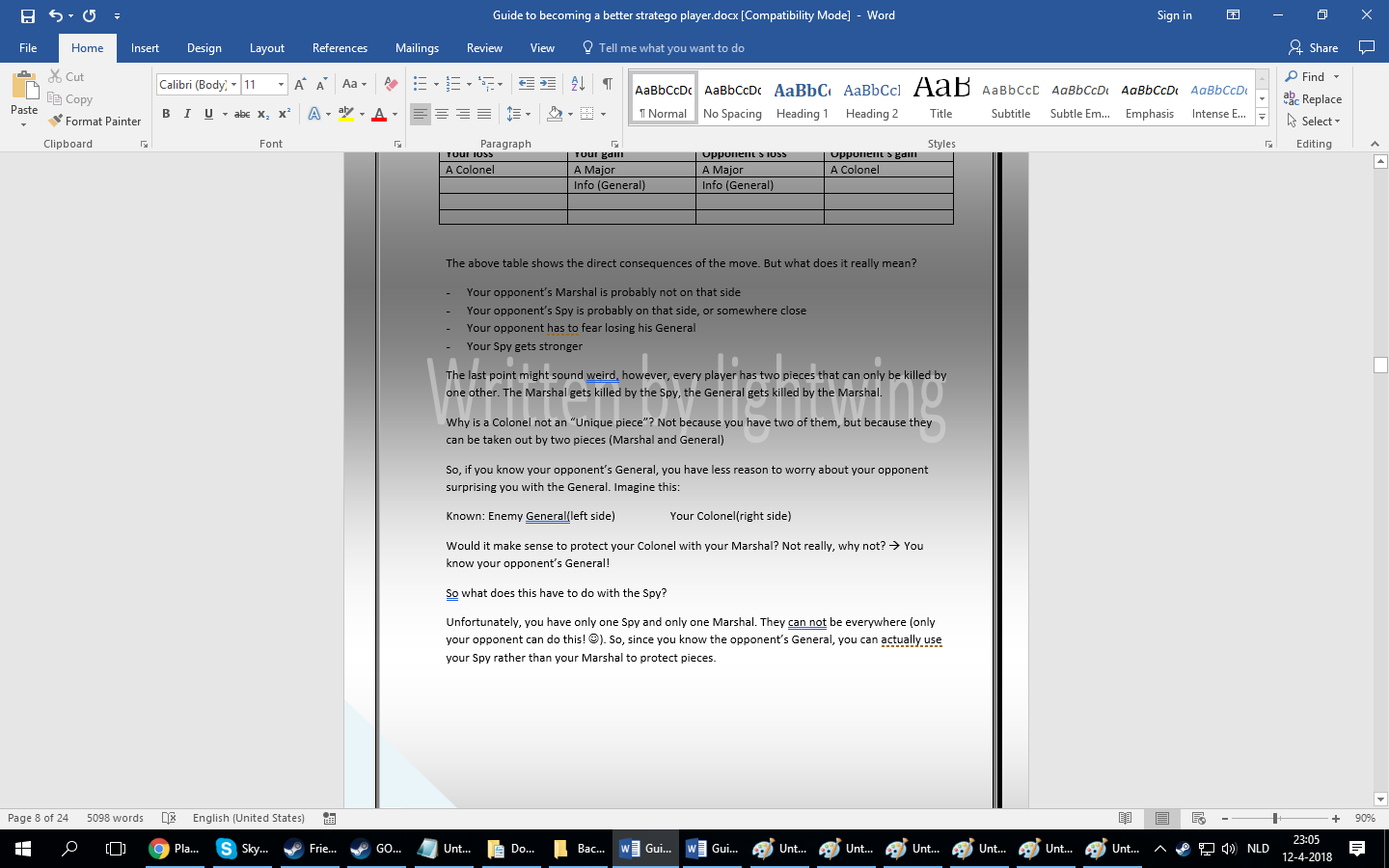 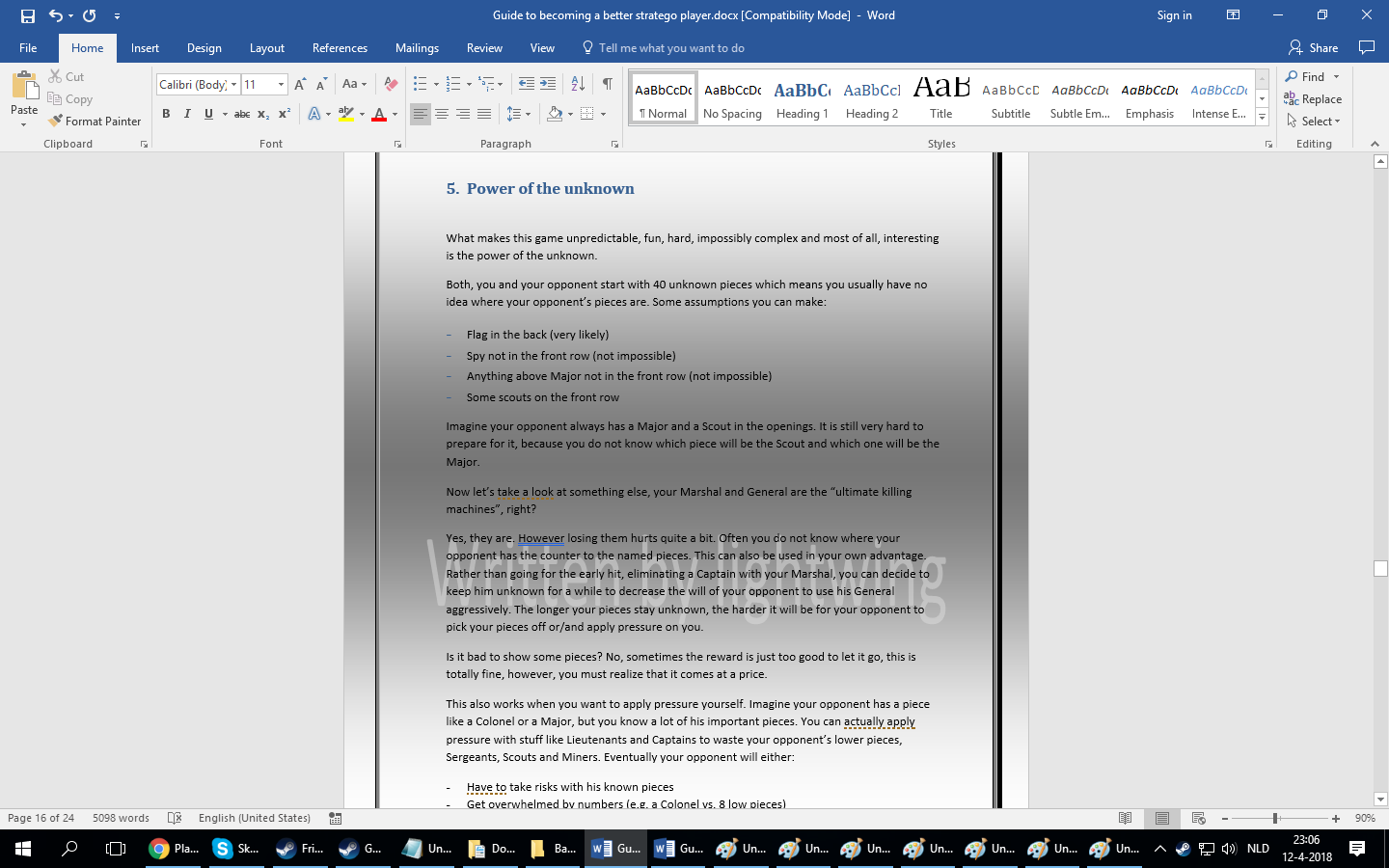 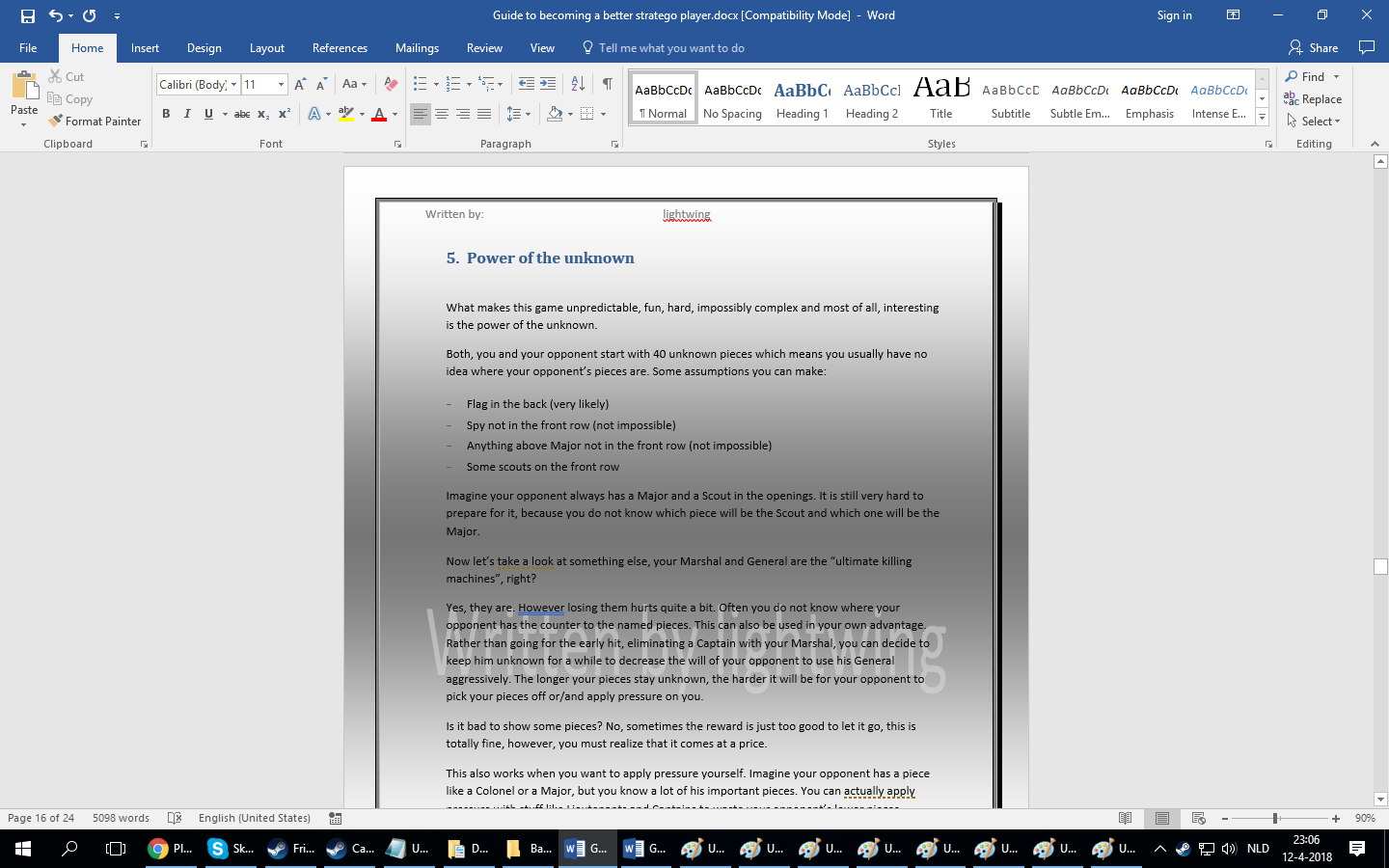 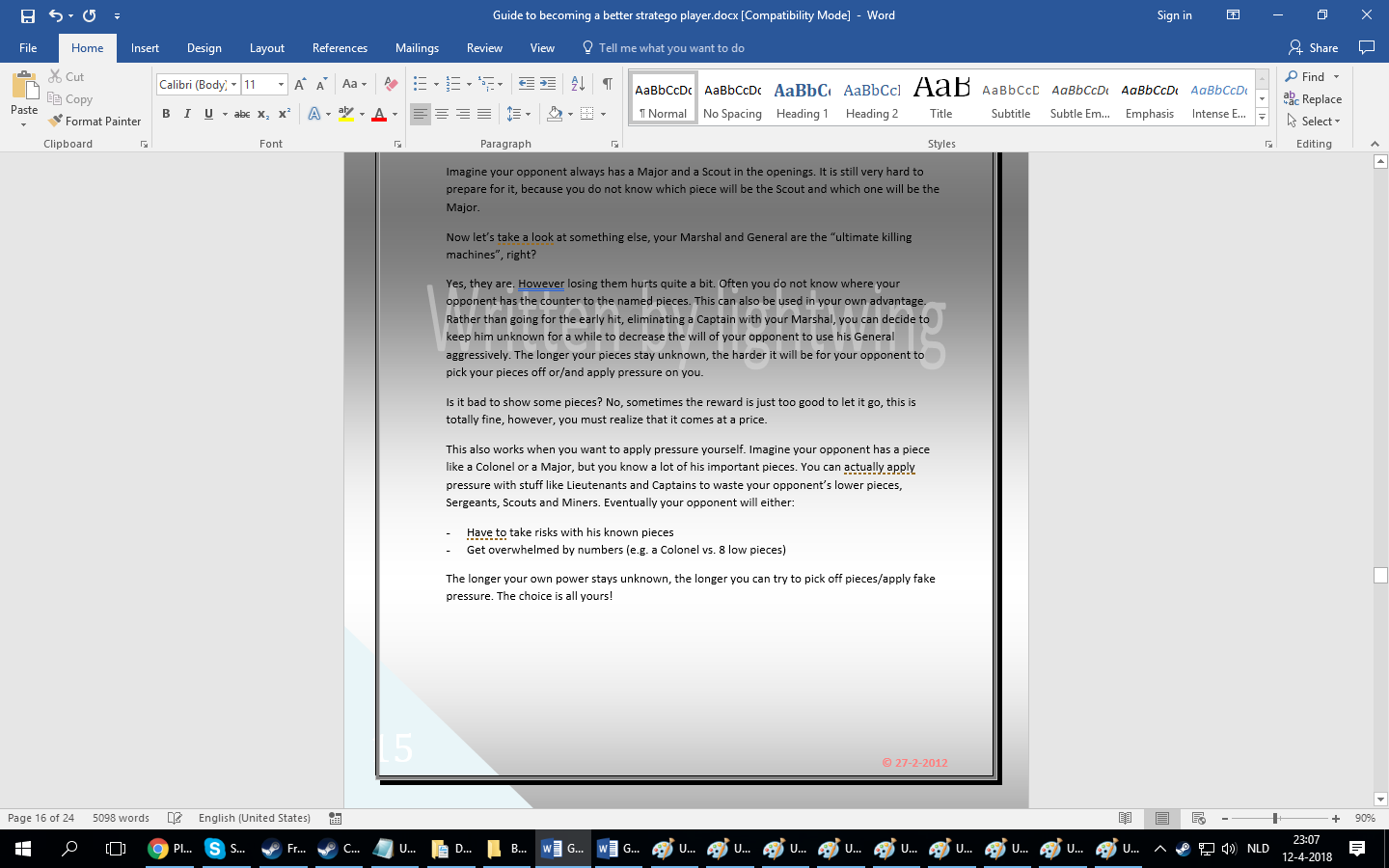 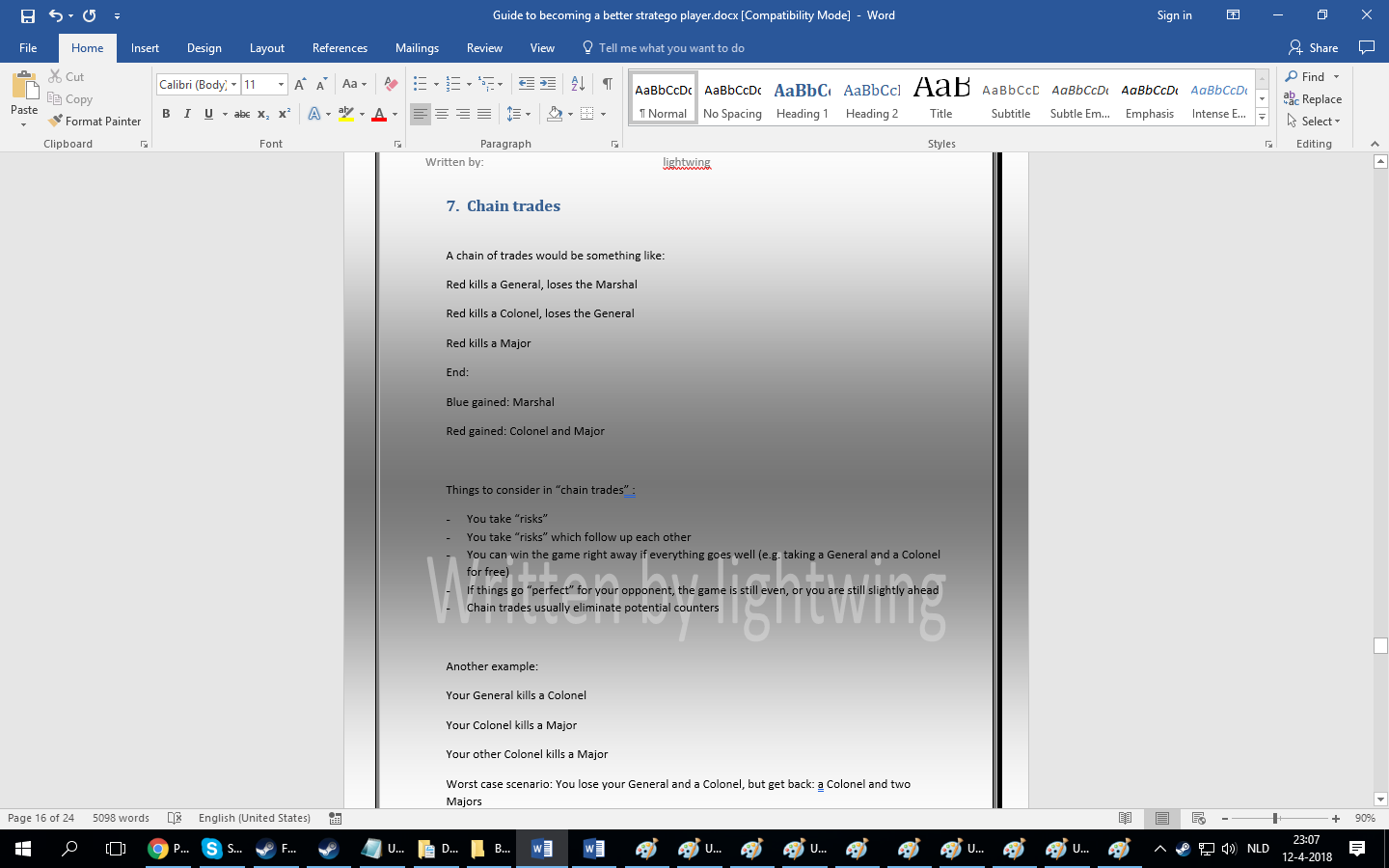 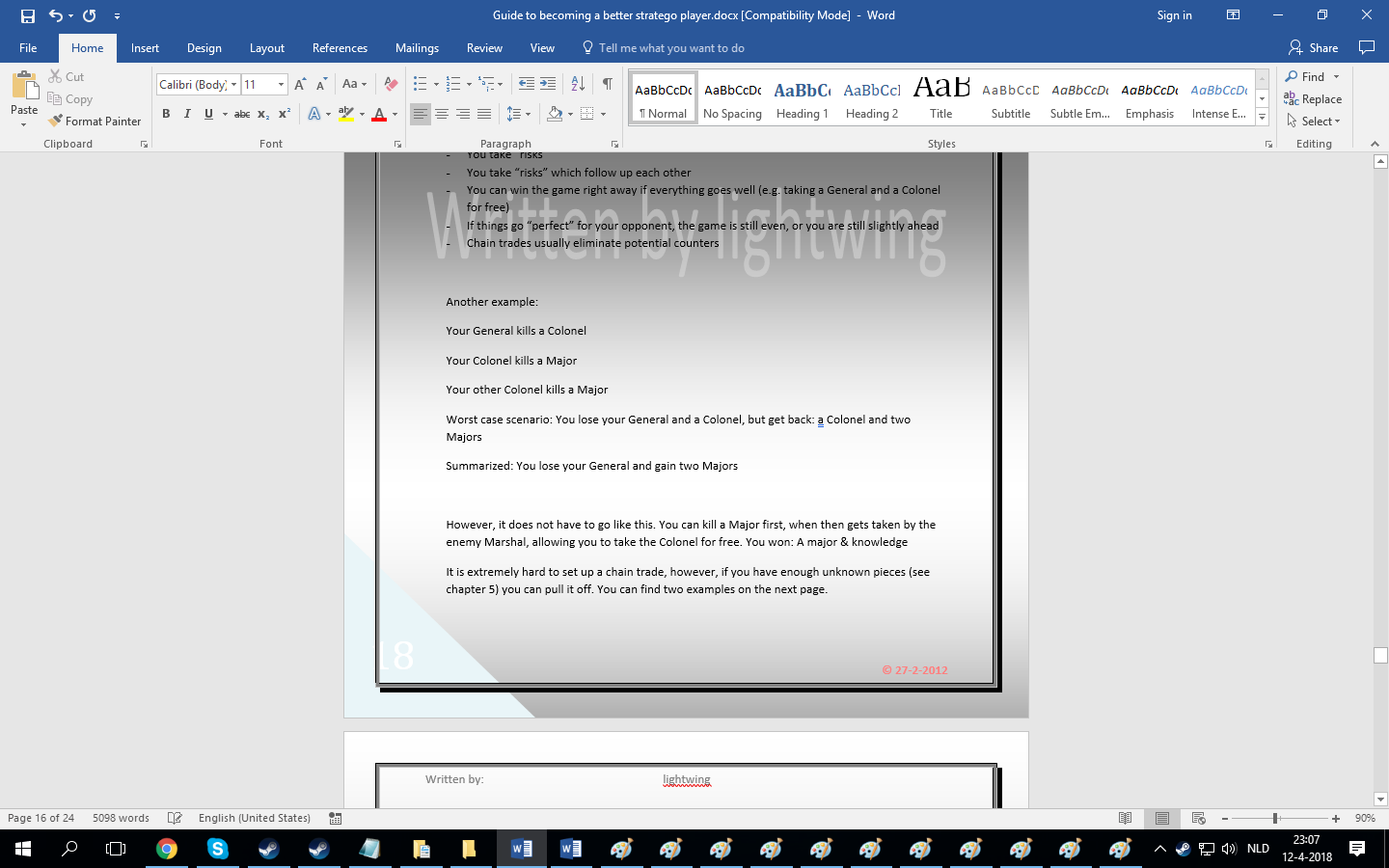 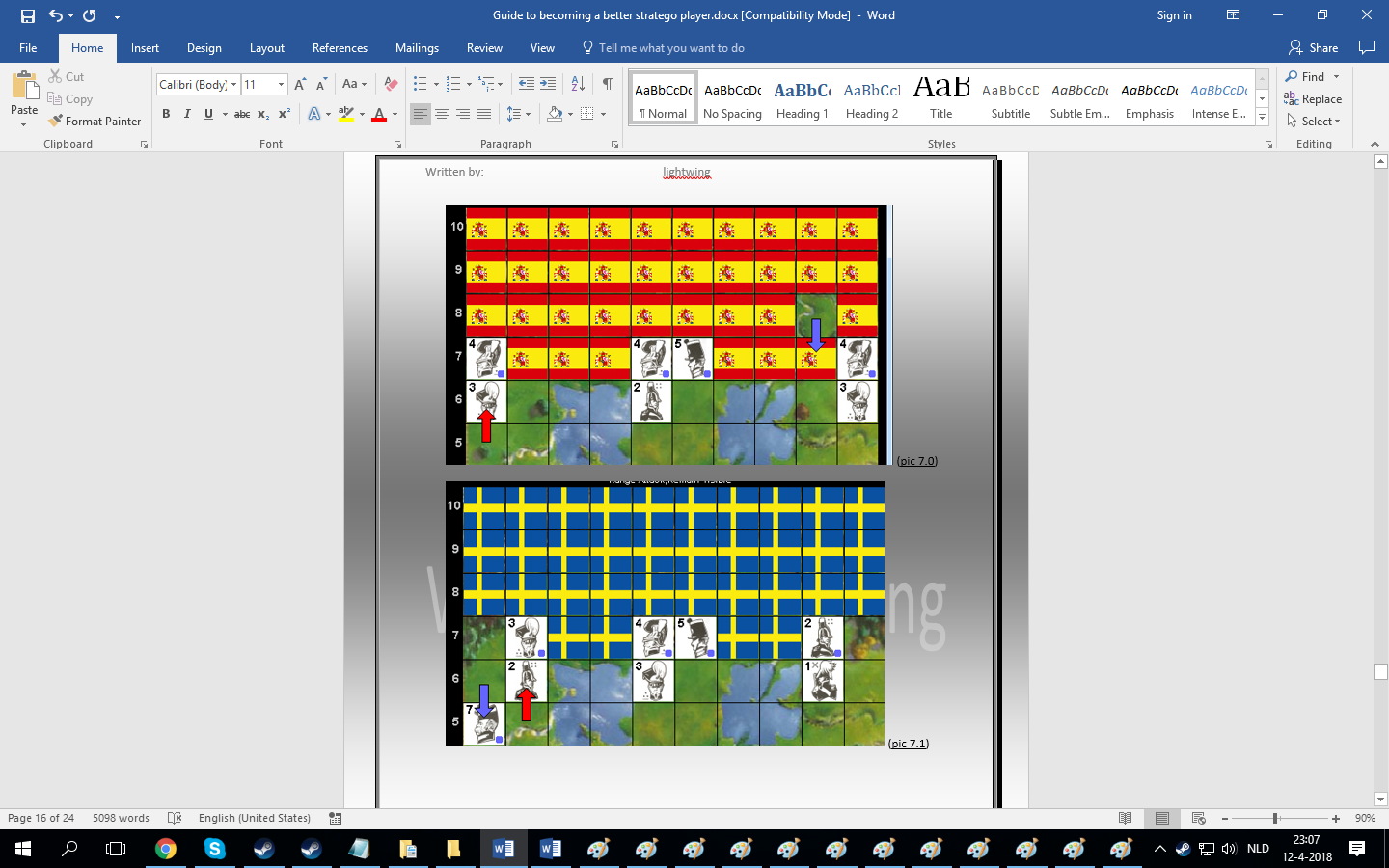