WC 2018 - Tips and things to know about The Netherlands


40 replies to this topic

In this topic I will post some general things to know about the country known as The Netherlands.

The official information about the WC 2018 will be in another separate thread.

As one that gets international visitors regularly and having lived in various other countries, I tend to see The Netherlands from a more international angle.

When we get international visitors, we tend to take them to this place. It is a place a bit north of Amsterdam and reachable by train (station Koog aan de Zaan and walk from there) or car. It is in the low parts of the country far below sea level, so they are wet lands.

Things to see include: a place where they make cheese from milk, a sawing mill, a mill that is used to grind paint, a wooden shoes shop where they demo how the woodens shoes are made and have many old style wooden shoes on display, a wheel makery etc. It is nice to go inside a windmill and see how they work and make a picture from standing on one and having the beautiful surroundings with more windmills and a view of classic Holland.

There are actually people living in the classic style houses they have here. It is also possible to go on a ferry on the river Zaan or cross it with a speedboat to make a walk on the other site of the water. 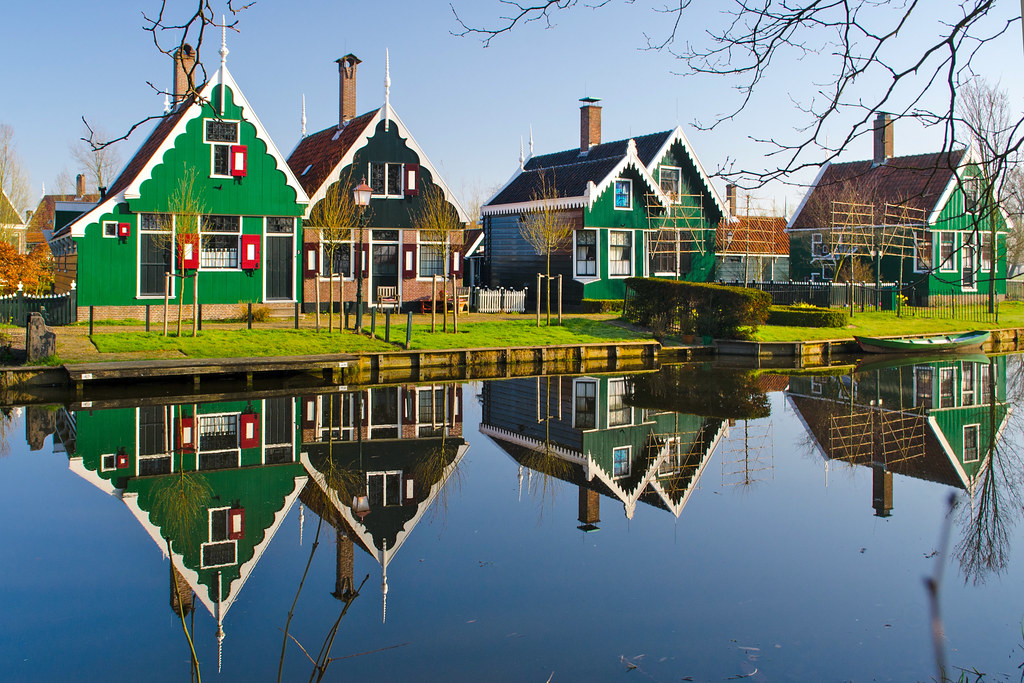 I tend to call this the National Treasury. It has many of the paintings and other art made during the Golden Age of The Netherlands and, about 400 years ago. Most notably The Nightwatch and various others by Rembrandt and The Milkmaid by Vermeer. It also has art from other ages, but the masters of the Golden Age are most well known.

Last time I was there they were redecorating and a large part was closed. Now the whole museum is open again for the public.

It is on a square called Museum Square near the Van Gogh museum and the city museum.

Funny fact: the museum has a bicycle tunnel that allows you to cross from one side to the other so people don't have to go all the way around when crossing Amsterdam by bike.

When they just opened the museum many unexpecting tourists got hit by bikes.

The museum building itself is a nice work of architecture 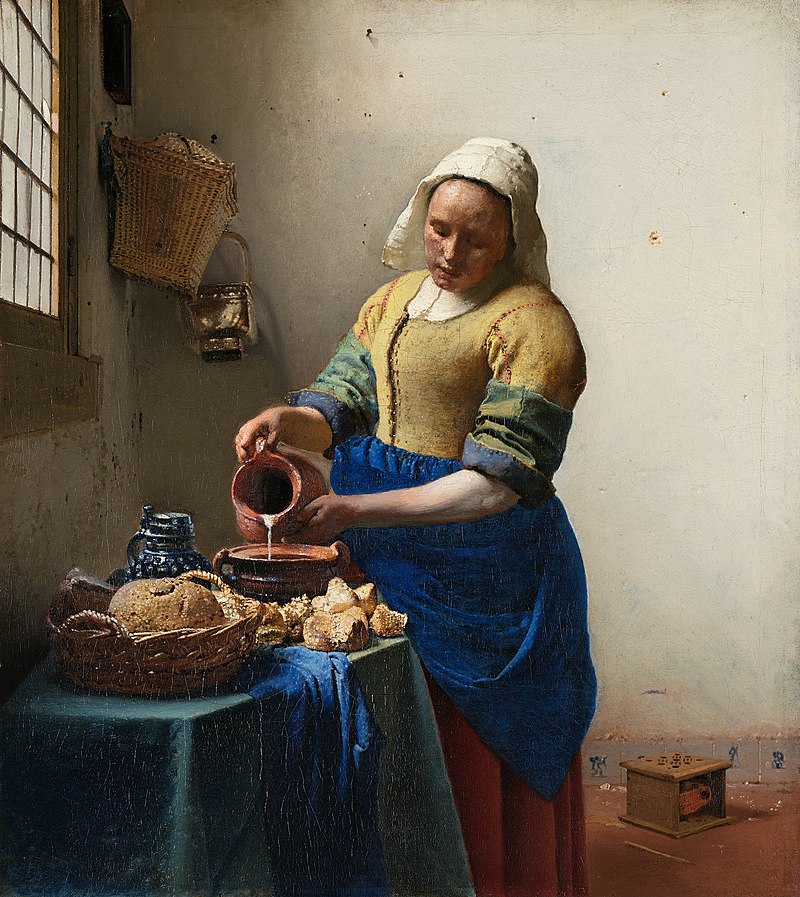 The most favous Vermeer painting

National treasure nr 1 in my opinion: The Nightwatch by Rembrandt

This castle is one of the most beautiful ones in The Netherlands. Build around 1296, it was used by count Floris 5 who started his rule at the age of 12. His father was killed by revolting peasants from the part of the country where I grew up. It was hard to fight war in this part of the country because most of it was swamp/wet lands. The body was hidden somewhere under the fire pit of a farm. Floris 5 spend a large part of his live avenging this deed and trying to regain the body.

Floris 5 understood he needed to control his lands and made roads and dykes to get rid off some of the water, this helped developed the area, but also helped him gain control of his territory to prevent future issues.

Floris 5 also build a special castle in the north to ensure his power up there, very close to where my family still lives.

At the end of his rule he was beloved by his peasants, but killed by competing nobles near the castle.

Most likely this was inspired by the conflict between England and France. For long Floris supported England, but when he switched sides for political reasons, England banned all trade with his territories and made a plan to kidnap him.

A few hundred years later, in the Golden Age of The Netherlands, various famous poets  and writers were guests of the owner in those days, spending time in the Muiderslot.

From the higher levels of the castle you have an amazing view of the Ijsselmeer (big lake) and surrounding area.

The 17th century style plum garden and herb garden are worth seeing too.

At the moment the castle is promoted as Amsterdam Castle, its not actually in Amsterdam, but it is close enough and easy to reach.

Everyone I took to see it, enjoyed the experience a lot.

Bonus: this place is really close to Naarden-Vesting. 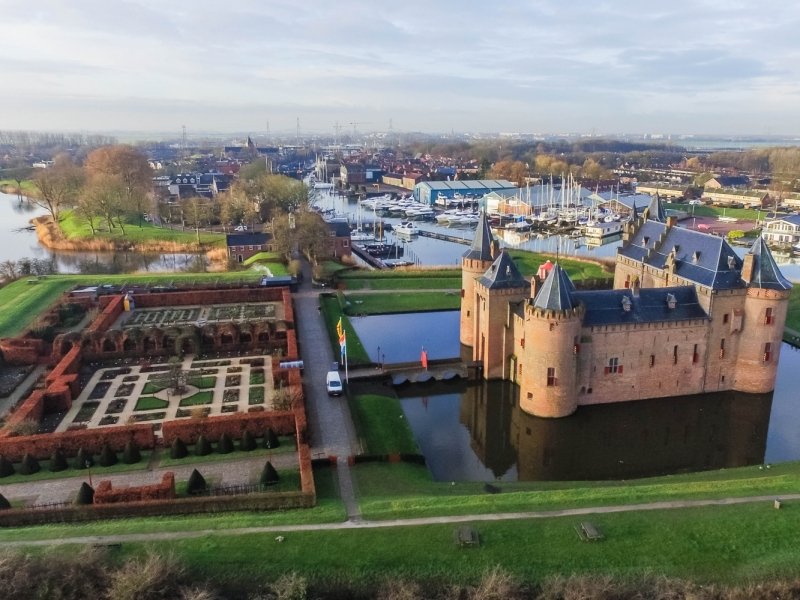 Het Muiderslot including the gardens

The murder of Floris V father, Willem 2. He was killed by the Westfrisians when his horse fell through the ice.

Located near the North Sea and wanting to spread the tourism a bit more, Amsterdam marketing office decided to rebrand the beaches of the nearby villages and cities.

It does not matter much, because the beaches are good anyways, just not what most foreign people expect.

For lounging in a beach place, having a nice lunch or cocktails or just sitting on the sand with your towel and some self brought foods, the North Sea is a nice place to be.

What is more, the area behind the beach strip is excellent for walking, the Dunes as they are called are one of the nicest nature areas in the whole country due to the diversity of the landscape.

In Bloemendaal there is a lake where birds are breeding and a spotters house, which can be reached by foot only. It is a nice walk. 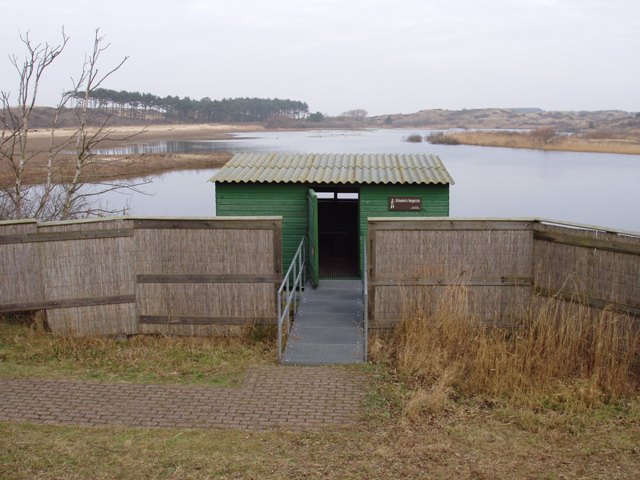 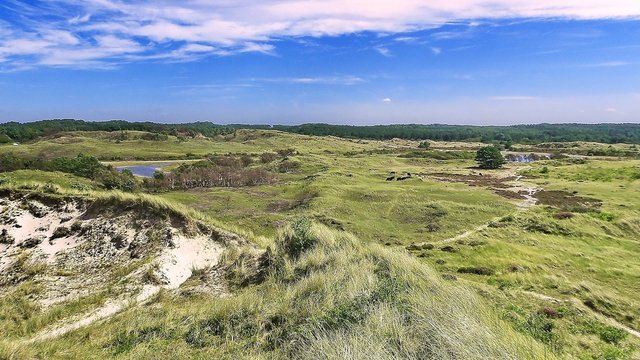 Another view on the dunes landscape

The city of Amsterdam was largely build during the Golden Age of The Netherlands. Most of the houses in the centre of the city were build by traders to store their goods, grain and timber from the Scandinavian countries, spice from the Far East, Tobacco from the New World. Anything that moved around the world might end up in this city.

For the cultural fans, the Canals are one of the nine Unesco world heritage sites in the Netherlands. The view on the old city is amazing, most tourist take a boat tour to enjoy the experience.

In the old days the canals were used to move all the goods, they were the key transport network. City view near one of the bridges at night

Canal Houses, in the top of the houses you can see the original pull beams used to lift sugar or tobacco or now furniture to the higher levels Rare moment in the last years when the canals were frozen, ice skating accross the city

Ok the Dutch kitchen is not so well known as many other European ones and this has good reasons. Many foreigners just dont like most of our more classic hot food. I can not blame them, I don't like it either

Notice that we normally have breakfast (sandwiches and such), lunch (again cold, based on eating bread) and dinner.

I will try to show you some of the nicest things we have based on an article from iamsterdam.

Dutch pancakes (deserve their own article),

Oliebollen (nice when in season, around new year)

Kibbeling (fish, best with garlic or ravigotte sauce, from fish specialist on market or so)

Stroopwafels are a key export to most countries we travel,

To skip imo: Raw herring stamppot, snert and maybe the liquirice (mostly Scandinavians love this though)

I will add one specialty to it: Beschuit met Aardbeien (some dry cracker with strawberries, but only with Dutch strawberries and only when in season)

Food from the Wall at FEBO (throw in coin, grab burger or better Kroket)

Below: beschuit met aardbeien and some butter on it and white sugar.

A wonderful welcome guide to your country.

These are mostly focused on the area around Amsterdam, where the world championship will be held. I hope it helps people to see that there is enough to see and do there. I will post some more later this week most likely, there are plenty of other things to see and do and people deserve to see our pancakes in a separate post

... personnally I know Heineken and Mars

Yes,  Heineken is rather famous in Amsterdam. Sometimes i see their horse and wagon pass through the inner city.

The Heineken Experience (Amsterdam) will get its own post.

I already got private feedback regarding the two Heineken bottles on the beach lounge picture with a comment that they should be a Flemish beer. Be assured apart from the local brands we have some of the best beers in the world in many places.

Funny story about Heineken: when I was visiting them with the student association on a business visit many years ago, they asked us what we wanted to drink. It was early in the day and the recruiter asked  "Do you want coffee?" One of the smarter students said:"We are not visiting Sara Lee." Sara Lee was the main coffee company. It was a very nice afternoon with lots of Heineken products.

Mars Veghel is a legendary company too, but they are more to the south and a bit far to go and see. Holland (nickname of The Netherlands, actually refers to two of the provinces with most population) has one thing that always amazes foreigners.

It is called pannekoeken (pancakes). Pancakes can be eaten for lunch or for dinner. They can also be a dessert with ice cream.

When I was young we mostly had them for dinner. Traditional ones are bland and have stroop (sirop) or powder sugar on top.

In a pancake restaurant one can have them typically with cheese, bacon, banana, apple, cinnamon etcetera.

In the more modern pancake places you can also eat more extravagant models, for instance the salty pancake with Gyros.

In Amsterdam this restaurant is great to try, it is always busy.

The farm in the Amsterdam forest (Amsterdamse Bos) also has a lot of pancakes but they are more simple and made by a fast making machine.

Another chain of restaurants I tried is this one. They have one restaurant in the area where the tournament is held, the others are in very nice old towns, similar to Naarden-Vesting, more to the south. Their menu is in Dutch and German.

Well, with this piece about pancakes you changed Major Nelson from a maybe to a yes for sure. 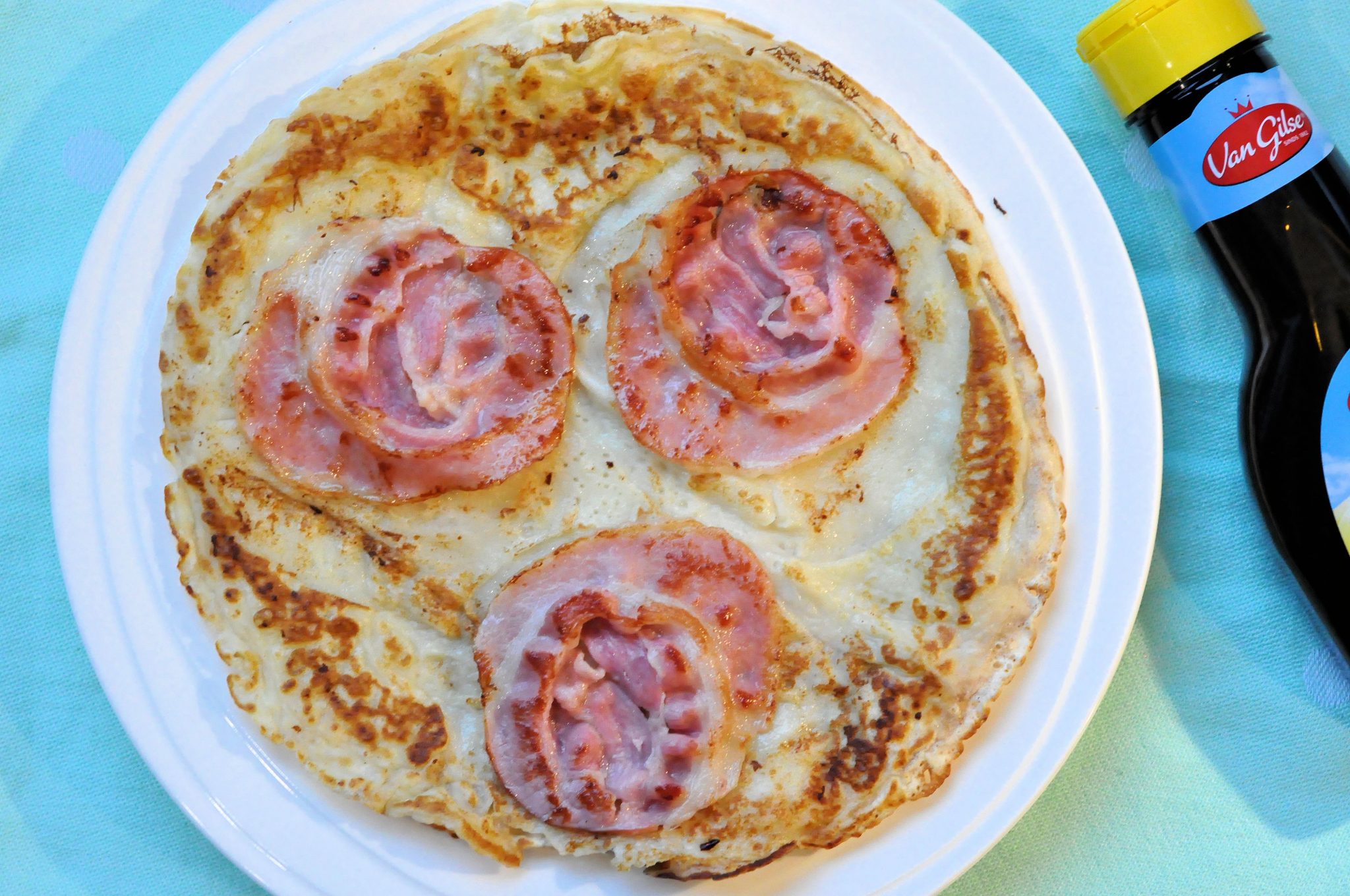 For our English friends: the pancake with bacon Well, with this piece about pancakes you changed Major Nelson from a maybe to a yes for sure.

Based on positive feedback regarding the pancakes: bonus pictures of poffertjes (kind off mini pancakes)

Here how they should be eaten: with creamy style butter and some powder sugar: 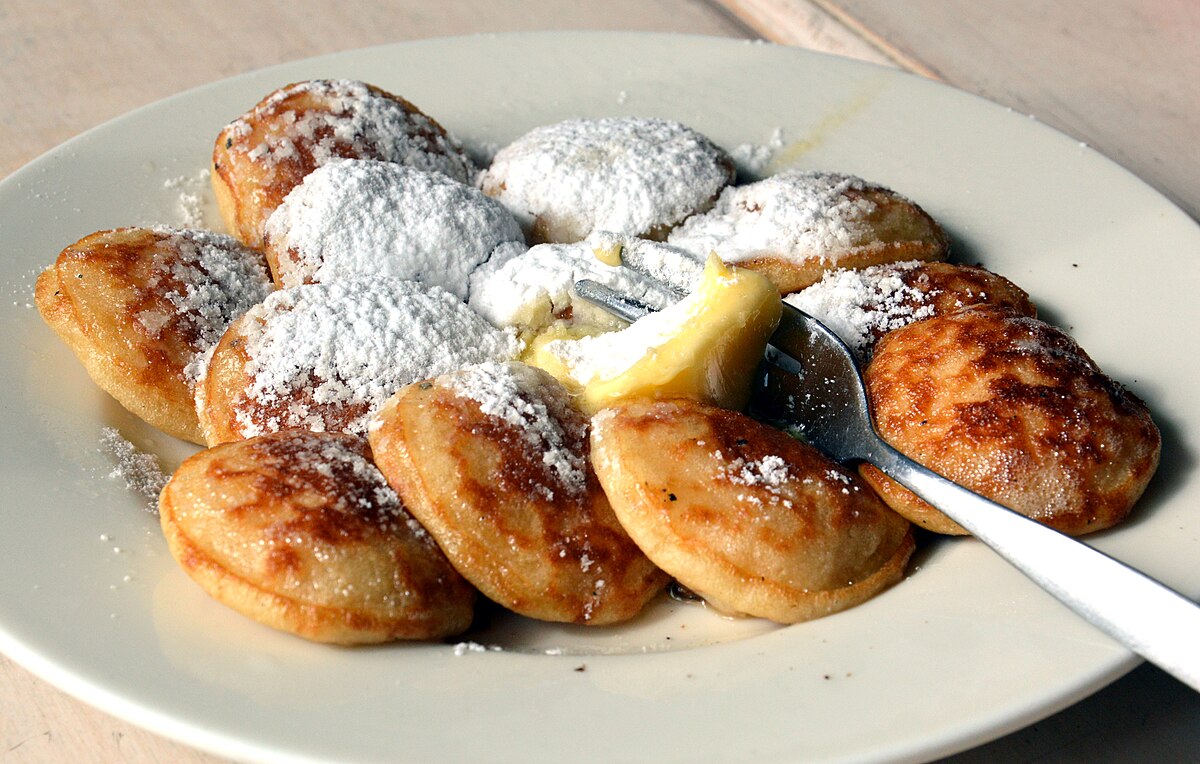 Preparation of poffertjes on a big roster: