You can find it here on there I'll discuss some topics which usually are not about Stratego game theory, but nonetheless hopefully interesting to some of you, the topics will usually be Stratego related (both online and live).

Next topic will be about: Currently unknown (24th of september, 2019)

Nice to see more blogs. Is there any particular reason why you are not planning to post about game strategy? Is your competitive advantage easy to imitate by other top players once this becomes common knowledge? Perhaps you can post some more elementary stuff then?

I simply don't find it fun to write about these kind of things. Perhaps in the future, but not in blog style

. I actually made a structure for something way more detailed ages ago, but never got to really doing anything with it.

As written in the welcome post, you can make me some suggestions about topics. "elementary stuff " might have a different definition for the two of us.

Warning: Wall of text and not as structured as there were too many things to share I initially didn't think of

Thank you for starting a blog on your chosen subject. Naturally, there are many of us who would like to benefit from your experience in the world of Stratego, but your points are understandable. In truth, there will always be something very useful, even if it is not a direct statement about gameplay, that will get one's mind working on seeing some new aspects to the game.

By the way, I have enjoyed reading your interviews of players from the WCO Tournament that you have been sharing in this forum. This really helps to appreciate some of the fine players we have here who visit and support this place. It also makes for fun reading because it is a great way to remind all of us that these are real people, not some internet spectres, but real folks with whom one may make friends–and what could be better than to make friends with other folks who love Stratego!

So, once again, thank you for your generous contribution and I will look forward to reading your posts as they come.

http://nortromstrate...an-players.html my take on Stratego and AI.

Red can draw. Since there is no mention of a clock, Red sits there doing nothing until his opponent offers him a draw.

Once red accepted it, we'll be in touch about it. I feel red is going to sit there for an eternity

That's an interesting position there, Nortrom.

I only studied this for about 10 minutes, so I may have missed something, but I do not believe there's any forced way for red to draw.

I did, however, find an alternative position where Red can put up more of a fight. Red can potentially have chances for a draw in this position if Blue miscalculates 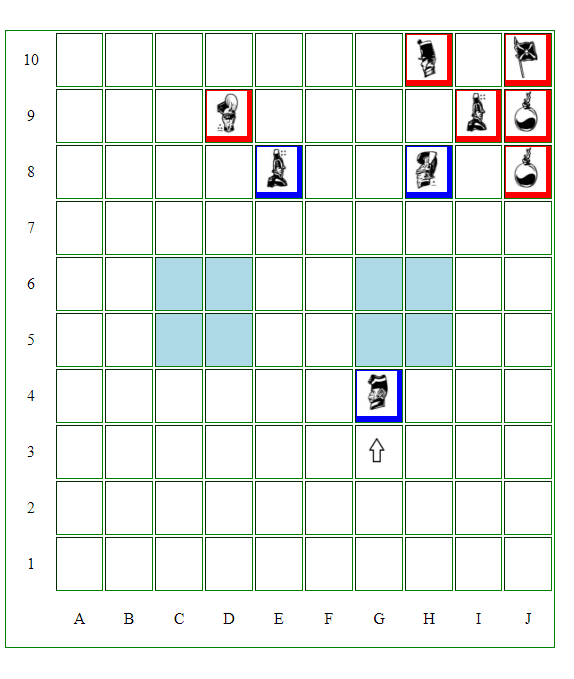 Yes, the first variation is to show what a human would probably see (colonel for a miner). It is definitely not a winning situation.

At first I wanted to make a forced sequence of say 15 moves (easy for AI) where the pieces would end up as they are, but after doing so, I noticed this position had lots of different outcomes depending on choices made by red.

Yes, the first variation is to show what a human would probably see (colonel for a miner). It is definitely not a winning situation.

At first I wanted to make a forced sequence of say 15 moves (easy for AI) where the pieces would end up as they are, but after doing so, I noticed this position had lots of different outcomes depending on choices made by red. Red now plays captain C9 and hopes for general D9? with captain C8! and the captain reaches the lake with a draw, even after blue exchanges generals. But of course it's not forced and a simple blue major D8 keeps the blue win (no sergeant required).

@ Unladen, after several attempts, I did find a variation which took about 60 moves where blue ended up winning from this position, but I am not sure whether red played all the perfect moves here. 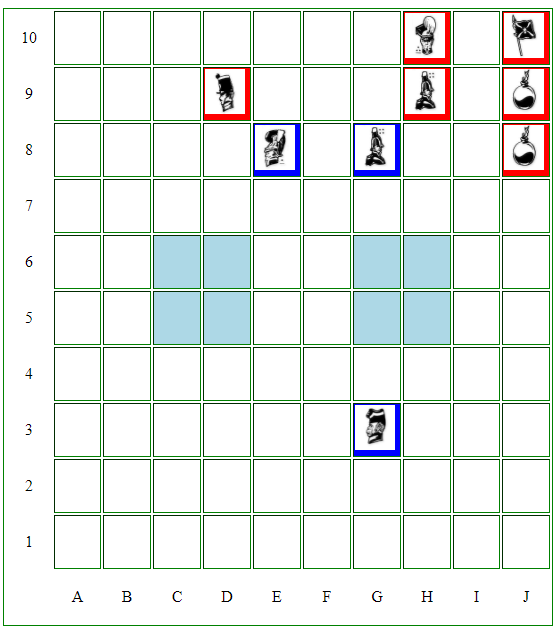 Blue having the sergeant will make the difference in this case.

While red can keep moving his colo between I10 - G10, the sergeant will eventually find its way to H7 / I7, at which point the colo can no longer wander off too far, as a forced general exchange will lead to a lost game for red. The fact that the colo can not move between I10 - H10 more than 3 consecutive times will hurt red.

Thanks, yes in variation 3 (with the general at I9 instead of the colo) the sergeant makes all the difference. I was responding to your blog, first part of variation 2:

2. Player red plays colonel I5 -> I6. Miner goes to H10, Colonel ends up at I9. Red general can either move forward, blocking the opposing general (which is pointless as blue can force red to move by using the sergeant ones the generals are lined up diagonally),

the point being that in this situation red is already to move when everything is diagonally lined up, so no sergeant required in variation 2.

In chess or draughts, such endgames would be solved exhaustively by using endgame databases. The much bigger size of the Stratego board would stretch normal computers to their absolute limits for these type of endgames (6 moving pieces, fixed bomb formation). And it would require coding the 2-square rule somehow, as well as double chasing, so I don't think it's very easy to get the absolute truth here.

I think for the purposes of what Nortrom has illustrated, Blue's flag and bombs are basically irrelevant–suppose it is just a corner flag bombed in? Red has no miners so it is irrelevant.

As Sgt. Joe Friday used to say, "Just the facts, please," and the facts appear in the diagram.

Most probably you are right but what i want to show is that this is a pure single case. With one more bomb in red's field it can change completely the problem. Same thing if the red cap and blue major are just one square right. The interesting point is when such cases are representative of general situations not of single particular cases.

first observation is that if blue wants to have a chance to win he can only do it if the last miner takes the only bomb he can have access to in I10. Any other solution will lead to a draw.  Even if the miner would escape left to G7 and F7 he will never be able to come back to the bombs zone. So the first sequence of moves can only be red gen moves J7-I7, miner moves along H column to H10 and red gen to I9. Then colonel moves from I5 to H9 while blue gen follows the red col with 2 square behind. When red col reaches H9, blue has gen in I7 but is forced to take the bomb in I10 with his miner which forces the red gen to capture miner in I10. From there on the following move is crucial.

1) Let's consider first blue gen moves I7-I8 and red gen moves I10-I9. If blue gen exchanges the gens, red col moves from H9 to E9 to force blue major to liberate the red captain. during these 3 moves blue will bring his sergeant from G3 to H4 cause afterwards he is obliged to move the major who is threatened by the col. Once the major has moved the captain is free to move to D10 and from there close to the flag to protect from the seargeant. Game is col and cap against serg and major => draw

2) Let's consider now blue gen moves I7-I8 and red gen moves I10-I9. Then blue gen moves I8-H8 threatening the red col. If red col moves left blue gen will follow him and the captain will be trapped, so red col moves H9-H10. At this stage red gen is in diagonal of blue gen, red gen only has to keep that diagonal position from blue gen and if blue makes another move  with sergeant or major he can bring his col from line 10 close to the major in order to break the diagonalization of the captain and liberate the captain who will have to substitute the col on line 10 behind the gen to block the access for blue sergeant. At this stage we have the 2 gens in diagonal of each other with blue not having access to flag and red col in diagonal of blue major blocking the access to the flag for the major. red captain is somewhere between H10 and I10 blocking the access to the flag for blue sergeant.in case blue gen comes to the idea to exchange gens at that time. From there on the situation is a draw. Red has to make sure he will not find himself in a double chasing situation with col/major and cap/sergeant. He can easily do that by approaching his col from the captain to force sergeant to move backwards.

=> does it answer the question?

Trading off the gen early is not perfect play by blue, so, no - Neither is moving the sergeant too soon, giving red the chance to stabilize its position. After colo H10 , red gen I9, blue gen H9 (with blue to play), pressure must be applied to the capt.

If you don't know where you go ... you have a lot of chance to arrive elsewhere ...
Back to General Discussion