Any forum can use a low content thread, where you can post stuff that does not deserve its own thread. So here it goes.

Let's start off with two questions

General+major vs 2 colonels. All known. Both sides have similar smaller pieces and position. Which side do you prefer? Having the master piece is good, but the colonels are not catchable, while the major is. Looks quite balanced to me?

How do you live your games? I am usually tense when starting up a multi player game, very concentrated and unaccessible (irritable even) to the outside world during it and after the game it can go around in my head for hours and sometimes even days. If I play a game vs Probe ftlolz (always with random setup), I don't have this at all. How is that for you?

The player with a gen is incapable of capturing his opponents top two pieces whereas the player with the colonels are only prevented from capturing one top piece of his opponents. The colonels do not have to follow the momentum of the general where as the general does have to follow the momentum of the colonels. (Considering the colonels are smart enough to make the major ineffective as the top priority). The colonels are much more powerful while there are more pieces on the board. The fewer the pieces there are, the more power the general obtains (considering a piece advantage has not changed, just depleted) because the gen taking a lane with a miner/scout and major can become safer if you don't have to defend your flag in your own territory but effectively doing it in your opponents territory.

Of course if the player with the colonels knew nothing except gen major and the player with the general knew almost every movable piece of his opponent I would choose to be on the generals side but considering everything is unmoved and unknown except the top two pieces on each side, I may lean towards the colonels coming out on top but in reality the better player wins here. This is a beautiful example of what being good at maneuvering would require to win. Someone like Nortrom or Losermaker would have a tough time being beat as either blue or red in this scenario.

The game of Stratego is about controlling the board, the player with the highest piece is not always the one doing that.

It will also depend upon how many miners are left in the match, for both players–if the general has a solid idea of where the opponent's flag is located, and he has at least four miners, this could spell out a disaster for the player with two colonels...of course with lanes being frozen in the ol' cat and mouse rally, this is a tough one. Also, thinking about the location of the flag–if the two colo. player has their flag on one of the flanks, this could be a turning point. General sets up a three square rule event forcing the opponent to get into the same lane as the general. It is highly tricky, but possible. A third lane is open, but again, the race to block lanes can be thwarted.

I had a match today where I was up a marshal, but tied on one gen. and one colo.–ultimately, he made a mistake and I got my trapped general out of hawk and into the field. All it takes is a single error and the game shifts dramatically.

I might prefer to have the general and major if I had plenty of unknown miners, but as said previous–clever wits controlling the colonels and the board could flip everything upside down.

I am usually...very concentrated and unaccessible (irritable even)...

I find this amazingly hard to believe, with even the greatest stretch of the imagination.

(You have practically described my feelings, too, OuweSok

KMC, you are correct, if the gen had four miners on his side out of opproximately 5-6 unknown pieces (equal to opponent.) I would jump on your boat then. I was picturing 1-2 miners with a capt, 2 liuets. 2 sgts. ( something like that) where even pinching one of those pieces gives you the game ( if you can save a usable miner for the very end)while again, making sure the major stays ineffective. The general is going to want to capture the lane which blocks both colonels from defending flag so the cols will need to position to stop that or have HARD pressure on generals flag to keep gen from taking the lane he wants with the pieces he needs. Both players have to wait for their opponent to make a mistake so it is hard to say indefinitely either way. The colonels need not to defend though, their best interest is putting enough pressure to force gen to defend instead. This will partially take away the extra power the gen has as the highest rank on the board.
Whichever player is better at bringing the fight to their opponent and not waiting will probably win.

If Morx has the extra time, he may have just the thing to give us a visual that we can use to chime in with 😉

The boardgameditor can be used by anyone. Here is the link.

If your using high version of windows, like windows 10, the snipping tool can be used to easily capture a small screenshot.

Its not restricted to me making diagrams.

Thank you Morx. This is a wonderful invention. The first that I know of.

Why are there so many players from Greece? I understand the Netherlands, because it is originally a Dutch game, but Greece? Seems kind of random.

Remember all the great strategists like Alexander , Miltiades , Leonidas .... are Greek !

Ouwesok, I would choose general + major. Having the powerpiece gives you more control over the game and over your opponent.

I do understand your feeling before a game. I can also be a little irritaded and tense before an important game

. Especially after a live tournament pieces are sometimes spinning in my head and situations appear in my head

Ouwesok, I would choose general + major. Having the powerpiece gives you more control over the game and over your opponent.
.

Obviously I meant in Ouwesoks example. I agree with you that having a pp does not always guarantee control.

Look at how much promotion of the game the Greeks do though! its no wonder they have so many players and a lot of new juniors taking up the game. I have seen photo's in the Greek topics of them advertising in the supermarkets. Over here I would be lucky to find a stratego game is a board game shop! It really is a credit to them.

My feeling here is that we could get more life into the forum if everyone would simply tell all of his opponents about the forum in BattleChat. It would not have to be much, just a simple "Don't forget to check out the Forum at the top of this game screen."

A few players I play actually know me from the forum but the far and away majority do not and, indeed, have never heard of the forum. This amazes me somewhat but I guess not so many people see the button at the top of the screen.

If there were more of a thing to see on the screen than the single Forum button, that would help, like an occasional small banner. But for now the best we can do to get new blood, I believe, is to just tell everyone about this place. If everyone in the current forum did that, we'd have a lot more life in here quickly.

My feeling here is that we could get more life into the forum if everyone would simply tell all of his opponents about the forum in BattleChat. It would not have to be much, just a simple "Don't forget to check out the Forum at the top of this game screen."

Trying to do my part. 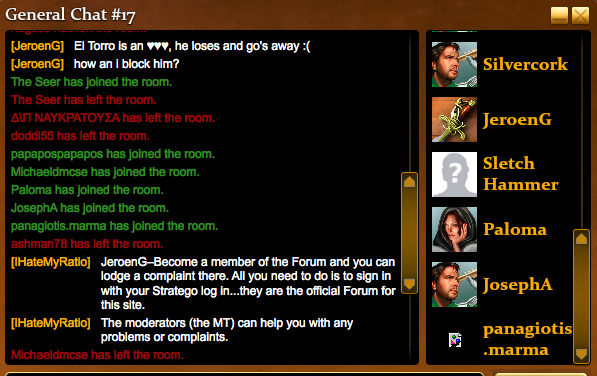 
True. But a lot do. It's one thing we are definitely able to try.

Today I was friended by Gejost and his alias Gejo$t. I am very famous and popular.

I found that stat disparity weird.

Now introducing 'Epic Stratego'. The structure of the lakes can be designed many ways. With 64 pieces (over 50% more pieces than a traditional board) there was a need to add a couple ranks.


You can turn the board vertical and make a some interesting changes.
https://imgur.com/gallery/zmNMq

All ideas can be used to make this 'Epic Stratego' better.

BIGGER is not always better.