I'd like to thank my family, who have provided moral support throughout this great adventure, and also my lucky goldfish (her name is waterfall) who helped me pick the answers. Nortrom may have won the WCO, but we all know who the real winner is.

Thank you WCO team/ Morx for hosting was very fun

Of course all those answers also lead to a final scoring:

With this result, TheOptician wins the WCO3 wizard by 1 point

Congratulations to  the British Gandalf of Stratego predictions! 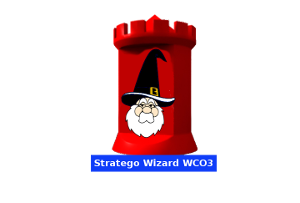 Not only did he play in the wizard, he was also a volunteer helping with this years edition. Also thanks for that!

MajorNelson and KARAISKAKIS were the runners up with 17.

Note that jimmies13 answers were also worth 17 points, but were edited after the deadline, so we did not count them for the current round.

I hope everyone enjoyed this edition of the Wizard and that TheOptician will use his new avatar that will be send to him soon.

Here are the answers for the final round:Wizard WCO 3 - Final round

21. The Grand Finale game is played between Nortrom and Master Mind. Nortrom has won many different  tournaments, but is very eager to win his first WCO. In terms of getting the medal sorted its very handy, it saves Morx from posting them accross Europe. If Master Mind wins, the same applies though.

How many of the top 3 players will come from The Netherlands?

B Nortrom was the only one, Hielco lost his game and does not win a medal for the first time in WCO history.

22. The two highest ranked Belgians in the tournament at the start of round 10 are Leppie and L70R.


23. The top 5 of the Online Stratego rating consists of Nortrom, playa1, Hielco, Overlord and hello124. They are all participating in the WCO this year. We already talked about Nortrom in question nr 20. Hielco will play Overlord98 this round. Both Im sure will bring their excited fans to support them in a battle for a potential medal.

There are actually 2 games then that involve playa1 and hello124:

What will playa1 and hello124 do in the final round?


D They both lose

E Something else will happen (think draws)

Two answers would have been correct here, but nobody had this right.playa1 vs Major Nelson was actually not played because of connection issues where playa1 was travelling.However in the thread playa1 gives up the game, so he did lose in a way, but something else also happened.

24. Surprisingly, the highest US player is only 18th.

E Any other combination.

This one actually has a story: in most combinations texaspete09 was on top, but I was playing him myself so I could directly influence the outcome here. Of course my answer was E

texaspete09 played me for 2 hours in a very intense game. I was not only fighting to win the game, but also for my points in the wizard. One cannot imagine the extra motivation this gives a player.

It was a WCO worthy game that was exciting till the end and I am looking forward to meeting this young talent on the board again soon.


25. There are opportunities available for those who give 100% right until the end.


Which player will move up the leaderboard the most number of places in Round 10? (eg a player who was 18th after R9, but finished 14th after R10 has moved up 4 places)

Actually there were 3 players that moved up 10 spots up the ranking. This seemed to be the highest move up the ranking list I would fine. One of those three players was Dutchkillers as mentioned by 2 players in the Wizard who got points for that.

No matter who wins the Wizard, TheOptician went for posting 57 seconds before the deadline of the final round. That is pretty die hard. Lets see if that gives him the edge to make him Stratego Wizard of WCO3

What is known in the business as an injury-time winner...

No matter who wins the Wizard, TheOptician went for posting 57 seconds before the deadline of the final round. That is pretty die hard. Lets see if that gives him the edge to make him Stratego Wizard of WCO3